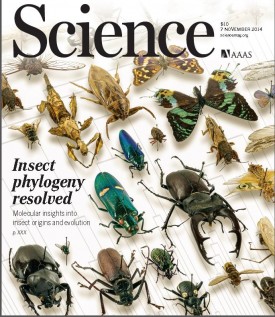 Cover of the Nov. 7 issue of the journal Science features scientists’ mapping of the evolution of insects.

When the dinosaurs ruled the earth, they were already bugged by creatures who had gotten there many millions of years earlier: Dragonflies and damselflies. In fact, says Rutgers University-Newark biologist, Jessica Ware, (Ph.D graduate in Entomology) the first creatures to take to the skies of earth did so 406 million years ago.

Ware knows of what she speaks. She is part of an international team of 100 researchers that just finished an unprecedented two-year project to map the evolution of insects using a molecular data set of unparalleled quality and dimensions. Ware was invited to participate in the project by Karl Kjer, professor in the Department of Ecology Evolution and Natural Resources at the School of Environmental and Biological Sciences, who is one of three co-directors of the team.

The initial report on their groundbreaking work is the cover story of the Nov. 7 issue of Science, the world’s largest general science journal, published weekly by the American Association for the Advancement of Science.

Why is it important to understand the evolution of insects? “Insects are diverse, economically and ecologically important organisms,” explains Ware. “The biodiversity of insects is huge—they are the largest species group on the planet,” according to Ware. While life on earth began in the water, the first creatures on land and in the air were insects, she notes. “Whatever people do, insects did it first. They waged war, they took slaves, they learned to work cooperatively, they flew, they farmed.” Humans developed so many millions of years after the first insects that “people have been squashing bugs since humans appeared on earth.”

During the project, known as 1KITE (1,000 Insect Transcriptome Evolution) scientists from 10 nations worked together to uncover relationships among insects as well as knowledge of their behaviors, flight, and more.

Thanks to the success of the project, according to Kjer, “Many previously intractable questions are now resolved, while many of the “revolutions” brought about by previous analyses of smaller molecular datasets have contained errors that are now being corrected.”

A second co-director of the team is a Rutgers alumnus (PhD, Class of 2007) and Ware’s former lab-mate Xin Zhou, head of the National Bio-resource Bank of Beijing Genomics Institute (BGI), in China. BGI is the world’s largest genomic sequencing center, and thanks to Zhou, BGI allocated millions of dollars of resources for the 1KITE project.

The third co-director is Bernhard Misof, head of the Department of Molecular Biodiversity Research at the Zoologisches Forschungsmuseum Alexander Koenig in Bonn, Germany.

“Insects are the most species-rich organisms on earth. They are of immense ecological, economic and medical importance and affect our daily lives, from pollinating our crops to vectoring diseases,” says co-director Misof. “We can only start to understand the enormous species richness and ecological importance of insects with a reliable reconstruction of how they are related.”

Although 1KITE’s research developed transcriptomes, or maps of the genomes, of 1,200 insect species, this issue of Science only includes 144 species. The 1KITE team has finished its analyses but due to the enormous size of the dataset, is still writing up its findings, with many more articles and reports to come, according to Ware. In fact, the 1KITE team had to develop new, advanced methods for analyzing huge sets of the genetic data derived from examining DNA in modern insects and comparing it to fossil records, formulating new mathematical calculations and using massive super-computers in the process. It was Ware who headed this task of estimating the ages when the insects evolved. “I ran the largest dating analyses that have ever been done, to date, as far as we know. With these comprehensive dating analyses, we are now able to say when flight, herbivory, and parasitism evolved, and much more. Ancestors of modern winged insects such as dragonflies were the first flying organisms, and we can say how old they are –it’s hundreds of millions of years — thanks to the dating work I led.”

Once the team finishes its reporting, it hopes to continue collaborating on new projects, though none has yet been selected, states Ware.

Rutgers University’s role in 1KITE was invaluable, according to Ware. “From start to finish, Rutgers has been fundamental in this project. Without Rutgers this would not have happened.”