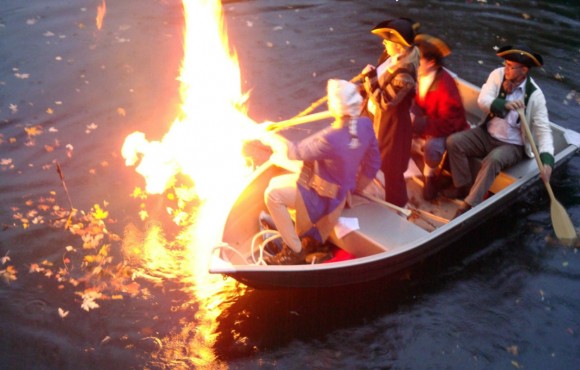 Re-enactment of the George Washington – Thomas Paine discovery that the “Will-O’-the Wisp” was a flammable gas on the 225th anniversary, November 5, 2008. Photo courtesy of Robert H. Barth

The Revolutionary War had ended and attention now turned to other issues. Debate ensued over the origin of the mysterious marsh blue flame, Will-o’-the-Wisp, which lured unsuspecting travelers to a boggy death near Rocky Hill. George Washington and Thomas Paine argued the origin was a flammable gas. In an experiment on November 5th, 1783, from a scow in the Millstone River, flaming torches were held above the river surface while soldiers probed the mud . . . 231 years later, Professors Douglas Eveleigh, Theodore Chase Jr., Craig Phelps and Lily Young submit a note of acknowledgement to their forebears on how that flash of inspiration from magical mud heralded American science and the study of microbiology. Read more at New Jersey 350.