Alan Robock, distinguished professor in the Department of Environmental Sciences and director of the Meteorology Undergraduate Program, is the winner of the Jule G. Charney Award of the American Meteorological Society (AMS) in recognition of “highly significant research or development achievement in the atmospheric or hydrologic sciences.” The award, which is in the form of a medallion, will be presented at the AMS Annual Meeting in Phoenix on January 7.

His citation reads, “For fundamental contributions toward understanding the climatic effects of stratospheric aerosols from volcanoes and other potential sources, and the role of soil moisture in climate.”

The award is named for Jule Gregory Charney who played a pivotal role in the development of modern meteorology. From 1956 until his death in 1981, he was a faculty member at the Massachusetts Institute of Technology (MIT). The Charney award is in the form of a medallion. 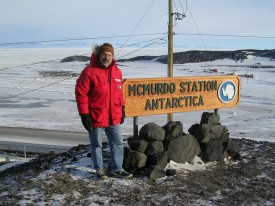 Alan Robock in the field at the Alan McMurdo Station, Antarctica.

Robock, who holds a Ph.D. from MIT, is a Fellow of the American Association for the Advancement of Science, the American Geophysical Union and the American Meteorological Society. He is one of several Rutgers researchers among the participants in the United Nations’ Intergovernmental Panel on Climate Change, which shared the 2007 Nobel Peace Prize with former Vice President Al Gore for their efforts to raise awareness and to lay the foundation for measures needed to counteract global warming.