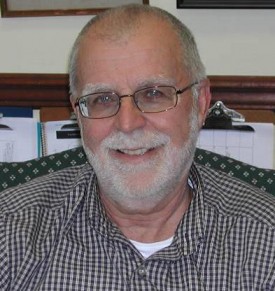 The School’s open invitation to alumni to share their “stories” has resulted in scores of interesting, even inspirational, memoirs about work and careers and the influence that their Rutgers education and experiences had on the direction of their lives.

And in some cases, there have been several roads taken. Such is the case with Deacon Tom Pluta, a 1964 graduate from the College of Agriculture, who came back to earn his master’s degree in environmental science in 1976.

Born and raised in Linden, N.J., with, as he puts it, “the sight (and smell) of the Bayway Refinery,” he grew up in a large, extended Polish family (“my mother was one of 12”). He did all right in high school, graduating in the top 25 percent of his class of 400, but admits that he “probably couldn’t get into Rutgers today.”

Rutgers’ proximity to home and its low tuition cost were the deciding factors in Tom’s college choice – in fact, Rutgers was the only school to which he applied. He paid for his undergraduate education with a $500 merit scholarship each semester, an ROTC scholarship, and the money he made from delivering milk, a job his grandmother got for him when he was 13.

Except for living on campus his sophomore year, he was a commuter. He notes that commuting made “the full college experience different for me,” but, nonetheless, fulfilling.

Here is Tom Pluta’s story, in his own words:

My time at Rutgers laid the foundation for a wonderful life after graduation in 1964, with a degree in plant science which eventually led to a lifelong career in environmental protection. Changing my major twice before I started (geology to liberal arts and back to forestry) required an extra semester to complete my courses. I was commissioned as a 2nd lieutenant in the Army Ordnance Corps in February 1964 and was assigned to Mannheim, Germany, for two years. It was my first trip abroad, and it whetted my appetite for foreign travel, an appetite fed later in my career. My wife Barbara and I were married in 1965 and lived in Germany the last year of my assignment.

Returning to New Jersey in July1966 with an 8-and-½-month pregnant wife, needing a job and a place to live, I got a field inspector job with the New Jersey Department of Health in the fledging Bureau of Air Pollution in Trenton. Burning garbage dumps in the Meadowlands, junkyard fires to “reclaim” metals, along with smoking chimneys and apartment house incinerators were my daily routine.

That all led to my return to Rutgers to get certified to “read smoke” using the Ringelmann Chart. It also led to a long professional and personal friendship with Professors Frank Flower and Joe Soporowski, one that continues today almost 50 years later. That followed over the years with a litany of notable environmental greats at Rutgers – Drs. Kaplovsky, Manganelli, Leone, Brennan, Finstein, Hunter, Genetelli, and many others.

One of the others was the late Ben Stout, who was a professor in the school and the associate provost for the sciences for Rutgers before he left to head the Department of Forestry at the University of Montana. He really affirmed my basic values, which could have been challenged, having left home and entered a time and place where you get to decide what and how to live in the new-found freedom. His interest in us as students went beyond the courses he taught. He was approachable, and you had a comfort level to discuss issues outside the subject matter.

The friendship and mentoring of my professors brought me back to Rutgers to get an M.S. in Environmental Science and laid another foundation for a 35-year career at the international, state, regional and local level and to leadership positions in several health and environmental professional organizations including the Air and Waste Management Association, the Mid-Atlantic States Association of the Air Pollution Control Association and the New Jersey Health Officers Association. 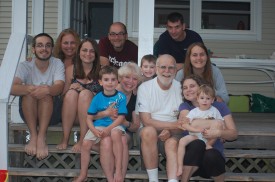 Barbara and Tom Pluta, center, surrounded by family on their traditional family vacation at Cape Cod.

During my 14 years at NJDEP I worked in regulatory affairs, enforcement, with local and county health departments, and with hazardous waste cleanups. Rutgers’ connections were an integral part of that work – Ned Lipman in the Office of Continuing Professional Education; Dick Dewling, my graduate school classmate and head of an environmental engineering company; Don Deieso, operating partner in a private equity firm; Jorge Berkowitz, senior associate with an environmental engineering and services company – all key figures in environmental protection at all levels.

After 27 years at the local and state level, I took an early retirement offer from NJDEP in 1992, going to the World Environment Center (WEC). For the next seven years I worked throughout Central and Eastern Europe and Asia under a project funded by the United States Agency for International Development.

The work involved organizing technical experts from a range of U.S. industries and providing expertise and training in pollution prevention, an approach that was totally “foreign” to the CEE companies. We left a legacy of Pollution Prevention Centers, some university-based, through a “train the trainers” approach to continue to spread what they learned. My many years of working with Rutgers experts and programs was a great help in transferring that experience.

They say that all good things come to an end, and the loss of federal funding closed out the active part of my environmental career. But closing one door also led to opening of another from the earthly to a more spiritual realm. After leaving WEC, I went to work at my parish at Holy Trinity R.C. Church in Westfield. I was ordained in 1992 as a deacon and continue my ministry there. My many years of environmental work laid another foundation in ministry. Part of my work involves working with our Peace and Justice Committee. One of the major tenets of our Catholic teaching is related to the sanctity of creation and our personal and corporate responsibility to be stewards of the world in which we live.

As I reflect back over the years I see more clearly what a significant role Rutgers has played in my life – in the education it offered and the values it instilled in me through the interaction and relationship with so many other alumni. Two of my daughters are Rutgers grads – Erika (now deceased) at Cook and Jessica at Douglass. Thank you, Rutgers.

As a postscript, Tom recalled how important the mentoring he received at Rutgers was to his later path. Referring again to Ben Stout, he says: “I think he helped me see that being true to myself and maintaining my self-respect were most important. Life was then, and still is today, about meaningful relationships, not material goods – a lesson learned early in my life from my grandparents and parents. I have passed that on to my daughters (including the eldest, Ellen, a Columbia University grad) and grandchildren. That is five generations!

Tom and his family, it should be noted, also have served Rutgers with nearly annual gifts to the university, the school, and various scholarship and student award funds for the past 39 years. Thank you, Tom.