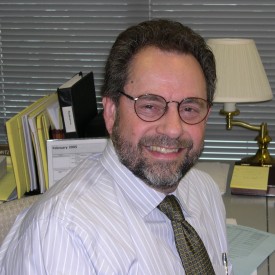 It’s fair to say that the youthful Jorge Berkowitz was “practical.”

Although now a vice president of a major environmental consulting firm and a highly regarded expert in environmental and public health, he acknowledges that his goals weren’t so lofty in his early college years.

He arrived at Rutgers in 1964 as a somewhat reluctant freshman and spent the first few weeks feeling he “couldn’t wait to get out of here.” He chose the then College of Agriculture because that was the one school in which there was no language requirement. And he admits that he spent the first three semesters just getting by – “you could say my performance was mediocre.” In fact, he recalls, when the grading system changed from 1.0 as the highest grade and 4.0 as the lowest to 4.0 as the highest and 1.0 as the lowest, “I never even noticed. My grade average was so firmly mired in the middle of the scale that it barely budged.”

But then, “the light went on. It was the faculty. They saw in me as an undergraduate a potential I didn’t recognize in myself.” It changed his life and his attitude and put him on a permanent path to success and to giving back. It also resulted in three Rutgers degrees and a 17-year stint of learning and teaching that he still recalls fondly.

The “light” occurred in the second semester of his sophomore year when he took a two-credit course called “Introduction to Air and Water Environments.” It caused him to think about studying microbiology, with the intention of working in public health. He encountered several outstanding professors – the late Raymond Manganelli and Melvin Finstein and current Professors Emeritus Joseph Hunter and Stanley Katz (“and not to overlook Deans Richard Merritt and Roger Locandro”).

At the time, environmental science was just beginning to emerge as a field, and Jorge “thought it would be a good place to apply microbiology. Drs. Katz and Hunter took me under their wings and related my studies to my interest in public health – for instance, the relationship between avian residue (bird droppings, to the rest of us) and salmonella.

“They and others encouraged me to continue on to graduate school at a time when the program was small, close knit and collegial. All the grad students helped each other, and collaborations cross-pollinated our work. It was a wonderful time to be in graduate school. It was a nurturing experience – and that made a difference in my life. Faculty were here for us in and outside the classroom. People took a personal interest in me.”

His first job was with the East Orange Health Department, one of the best in the state. He loved the field and the people, but then got a call from the late professor and department head Joel Kaplovsky, one of his mentors at Rutgers, who had a grant to train sanitary inspectors during a summer session and needed an instructor.

Jorge answered the call and, according to published accounts, for 10 years was the primary instructor and course coordinator of the Environmental Health and Law course, an eight-week, six-hours-a-day curriculum required of individuals seeking a license as a Sanitary Inspector-First Grade in New Jersey. More than 550 students completed the course, many of whom are now prominent figures in the field of public health in New Jersey.

“Teaching was my passion, but I realized that without the heavy research, tenure wasn’t an option. But I got a great deal of pleasure out of being in the classroom, and I bump into people who were in my courses and still talk about the experience,” he says.

Realizing that tenure was unlikely, he contemplated how to stay active and redirect his focus in a changing environmental health field. He was approached by the New Jersey Department of Environmental Protection to see if he was interested in joining them for a limited stint. 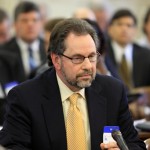 Jorge Berkowitz testifies before the New Jersey Senate Committee on the Environment.

“In 1980, I took what was supposed to be a one-year job at DEP, and I figured out that by staying after hours, I got to see a lot of policy decisions made. As luck would have it, I had a desk just outside the director’s door, and I became his trouble-shooter and was able to observe the making of important, and some not so important, decisions.” Then came the Superfund, with New Jersey as one of the hottest spots in the country. Jorge served as Administrator of the DEP’s Superfund Program and later directed its Air Quality Program and Water Resource Management and Protection Program, and served a term as Assistant Commissioner for Environmental Control and Management.

A biography published when Jorge received the Frank J. Osborne Award for Meritorious Achievement in Public Health in 2004 noted a few of his honors while at DEP: “He was in charge of all programs dealing with air pollution, radiation protection, chemical and nuclear response, noise pollution, community right to know, and pesticide control. Under Jorge, the division implemented several nationally recognized award-winning programs, including air toxics control, radon mitigation, and toxic catastrophe prevention.” It further noted that “during his tenure, New Jersey received almost 37 percent of all Superfund dollars spent in the nation.”

Jorge has stayed close to Rutgers and to his school. In 2003, Dean Lee Schneider invited him to be the Cook commencement speaker, “a very proud, and undeserved, moment,” he recalls. He remembers Schneider’s sage advice: “You may think you are brilliant, but here’s the most important thing – 15 minutes.” His message to the graduates – within the allotted time, of course – was that they would be faced with challenges that his generation never encountered, such as climate change, the need for alternative energy, and the quality and motivation of our political leaders. He recalls, “I told them: you don’t know it now, but you are going to be leaders, and this place has prepared you to be that.” Did his talk hit home? “Well, I don’t know, but as I was walking back to my car, a new grad gave me a thumbs up. I was gratified.”

Jorge is a Jersey guy through and through. He grew up in Washington, N.J., in Warren County, the son of the owner of the town’s hardware store. (By the way, his dad liked the name “George” but wanted his kids’ names to all start with a “J.” So he chose the Spanish derivation; nevertheless Jorge pronounces it the same as “George.”)

He went to Washington High School, one of 120 students in his graduating class. He said the longest he’s been out of the state was for 22 days one year. He even met his wife Mary in New Brunswick – in the Department of Food Science parking lot where she, as a short-course student, parked illegally in a faculty-only space. “It was love at first violation – truly!”

For all these reasons he connects strongly to Rutgers and the School of Environmental and Biological Sciences. He points out that although it is not the same place as it was when he was here in 1964 – “it was all-male and smallish” – he is proud of the changes and believes that the mission of a state university is very important to the future of the state. His pride and loyalty extend to the next generation as well. He tells the story of his niece, a shy young woman in high school who chose Rutgers for college because of its diversity, wealth of experience, and the opportunity for social interaction. “She is a different, confident, new person,” he says proudly.

And he continues to support the School and the University as a donor, especially Helyar House, where he was a resident counselor, as well as scholarships, faculty awards, athletics, and excellence funds. “What Rutgers does for society as a whole can’t be overstated,” he concludes.