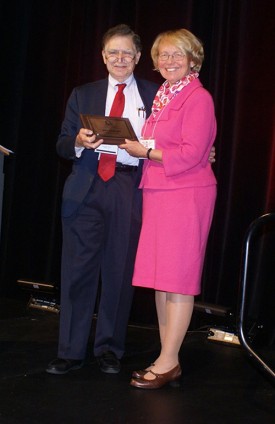 Joan Bennett, professor in the Department of Plant Biology and Pathology, was awarded the Stuart Mudd Award for Studies in Basic Microbiology by the International Union of Microbiological Societies (IUMS), an organization that promotes education research and collaboration in microbiology on an international scale. Bennett is also the Associate Vice President of the Office for the Promotion of Women in Science, Engineering and Mathematics at Rutgers, charged with promoting the welfare of women in science, engineering, mathematics and the health professions across the three campuses of Rutgers University at Camden, New Brunswick and Newark.

The Stuart Mudd award, given in recognition of “outstanding, selfless endeavours and contributions in microbiology for the good of society,” consists of a citation, a cash award of $1,000 and paid expenses to attend the IUMS International Congress, which was held in Montreal, Canada, this year. In addition, the awardee automatically becomes a Fellow of the World Academy of Art and Science. As a condition of the award, Bennett delivered a major scientific address at IUMS’ International Congress in Montreal in July.

Bennett was nominated for this award for her scientific research on aflatoxin genetics and biosynthesis with the goal of preventing their entry in agricultural produce, especially in Africa, Asia and other underdeveloped regions of the world where it’s a major problem. Aflatoxins are highly toxic fungal metabolites that contaminate foods and feeds globally.

Her more recent research, however, focuses on the gas phase (volatile) compounds produced by indoor molds and their potential impact on human health. As she explains, this latter research grew out of her experience following Hurricane Katrina and was the inspiration for her talk, “Black clouds, silver linings and fungal volatiles,” at the IUMS International Congress.

“In 2005, I lived in New Orleans and taught at Tulane University. Our home flooded pretty badly when the levees failed following the hurricane. My husband and I evacuated to New Jersey, where he is originally from. While in New Jersey, I called Jim White, my departmental colleague at Rutgers and asked him if I could use his lab to make microbiological media. The first time my husband and I traveled home to New Orleans, I had a suitcase full of Petri dishes. When I sampled my flooded home, the odor of mold and rot was so horrible that it made me feel sick.”

Bennett vowed that if she ever got a new lab, she would study mold volatiles. “That is exactly what I have done since joining the Rutgers faculty in 2006,” she says.