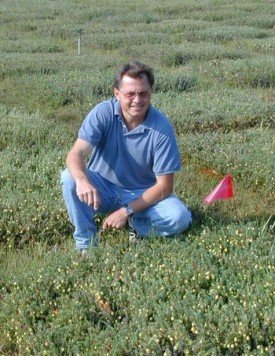 Nicholi Vorsa (Cook ’76, GSNB ’85) is director of the Philip E. Marucci Center for Blueberry and Cranberry Research and Extension in Chatsworth, N.J. He and his team have developed new varieties of cranberries that have offered many improvements for commercial production. The story of his work in collecting cranberry germplasm and mapping its genome appeared in the May, 2014 issue of Fruit Growers News, reprinted here.

The process leading to the release of breakthrough cranberry varieties at Rutgers University represents a nearly 30-year evolution. Driving the program to these heights has been Nicholi Vorsa and his colleagues.

After starting the cranberry breeding program in 1985, Vorsa became director of the Philip E. Marucci Center for Blueberry and Cranberry Research in 1991, a position he holds to this day.

Vorsa has received competitive grants from USDA. One of those grants – in collaboration with USDA-ARS scientists Juan Zalapa, University of Wisconsin-Madison; and Jim Polashock, Rutgers – is focused on the development of a high-resolution genetic map for cranberry.

The process includes the mapping of locations and regions on the cranberry genome associated with fruit rot resistance and other economically important traits including fruit polyphenolics, yield components (such as fruit size), fruit set and other factors that will allow for marker assisted selection in facilitation of future breeding programs.

In concert with the breeding program, Vorsa is performing ongoing research identifying the bioactive constituents – polyphenols, including flavonols, anthocyanins and proanthocyanidins – found in cranberry that are recognized as being beneficial to human health.

“Throughout this endeavor, Dr. Vorsa’s decisions were consistently guided by an unyielding desire to bring science to the art of breeding, and conviction to act in accordance with what would be beneficial long term for the cranberry industry,” said Abbott Lee, founder of Integrity Propagation, a New Jersey nursery that has exclusive rights to produce foundation-level plant material from the Rutgers’ selections. “No other cranberry breeding program in history has made such a patient and extraordinary effort to influence the success of their progeny.”

By 1991, Vorsa’s research had earned him a full professorship within Rutgers’ Department of Plant Biology. In addition, Vorsa possesses numerous patents concerning health attributive qualities of the cranberry, including urinary tract infection prevention and anti-inflammatory characteristics.

“The goal of the breeding program has been to identify superior parents of diverse genetic background, to produce superior progeny with improved traits,” Vorsa wrote in an email. “It was within this aspirational framework that enhanced yield, fruit quality and genetic diversity of the cranberry were to be achieved.” 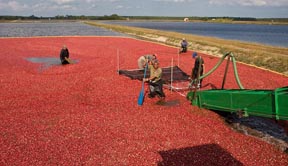 When his program was initiated in 1985, Vorsa was given the USDA germplasm maintained at the agency’s facility in Chatsworth, N.J. This germplasm was derived from various state agricultural stations, including those in Wisconsin, Massachusetts and Washington, and included the most common varieties in the industry such as Early Black, Crowley, Howes, Stevens, Ben Lear, Pilgrim, Franklin and Lemunyon.

In an effort to expand on the USDA germplasm and broaden the gene pool as much as possible, Vorsa traveled the world collecting cranberry germplasm from both cultivated beds and wild cranberry stands.

In his initial evaluation of the germplasm for characteristics such as pollen fertility, Vorsa discovered that, in many cases, plots of a given “variety” were in fact composed of several to many distinct varieties. He noted that in contrast to fruit crops such as apple, peach and highbush blueberry, cranberry naturally spreads vegetatively by stolons (over-ground stems), and varieties will intermingle.

“Cranberry varieties vary in their vegetative vigor, and it has become apparent that many ‘off-type’ varieties have invaded and established themselves in producing cranberry beds over time,” Vorsa wrote. “An off-type typically does not have good fruit set, i.e. has poor productivity, allowing most resources such as nitrogen and carbohydrates to feed vine growth.

“Furthermore, the practice of using prunings and/or mowings from established producing beds has often selected and promoted the spread of off-types in virtually all growing areas,” according to Vorsa. “Even if a grower has planted a bed with vines that are mostly of the desired variety, the off-type varieties will vegetatively out-compete the productive varieties, becoming more widespread in the new planting.”

Beginning in 1991, with the promise of new DNA technology used in forensics called polymerase-chain-reaction, or PCR, Vorsa was prompted to develop the first DNA fingerprinting technology for cranberries, referred to as “randomized amplified polymorphic DNA” (RAPDs), followed by the development of “sequence-characterized amplified regions” (SCARs).

“Cranberry has a very limited number of morphological features to distinguish one variety from another, and most variety descriptions rely on fruit appearance – such as shape, size, season of ripening – making the discrimination of one variety from another very difficult,” Vorsa said. “The PCR SCAR technique requires only one leaf, or berry, for a fingerprint, and was further refined in collaboration with Dr. Polashock. Using this technology to study his cranberry variety collection (or germplasm), he found that, whereas there were only 40 to 50 known named varieties, there were, in fact, likely thousands of cranberry varieties.”

Although SCAR DNA fingerprinting technology enabled individual varieties to be readily distinguished from one another, many years of work, including replicated variety field trials, were required to determine which individuals possessed valuable traits, such as yield, color, disease resistance and so on; and which individuals would be the best parents in improving these traits, Vorsa said.

“Once the germplasm was sorted out, many hundreds of controlled crosses were made in the greenhouse and their progeny evaluated in thousands of (plots). We began to discern which varieties had the greatest propensity to develop superior progeny, and these varieties became favored parents.”