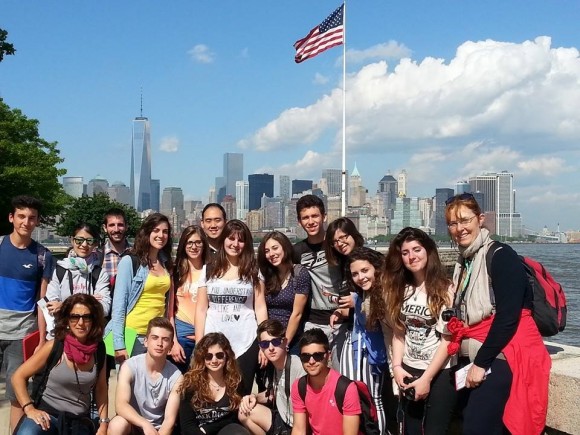 Youth from Sicily, Italy, visit Ellis Island and learn about the history of immigration to the U.S.

Over the course of three weeks in May and June this year, 14 youth and two adult educators from three communities in Sicily, Italy, participated in a Youth Leadership Program funded by the U.S. Department of State and facilitated by the University of Delaware and Rutgers University. During this exchange program, which focused on the general themes of civic education, leadership development and community service, the Sicilian youth toured parts of the U.S., learning about democracy and developing community service projects to be implemented in their own home communities.

“Each of the community service projects was different and I was surprised at the level of commitment that they showed to each other during the trip,” said Alayne Torretta, county 4-H Agent for Rutgers Cooperative Extension and program coordinator for the grant in New Jersey.

“By the end of their three-week stay, they were coordinating their projects where they overlapped in communities back home and assuring each other of their support upon their return. These kids are going to do awesome things for their towns and it is heartening see them bonding with each other still on Facebook after the trip,” added Torretta. 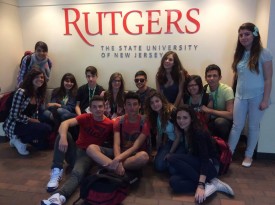 Two weeks were spent with host 4-H families in New Jersey. The youths learned themselves in team building, learning about positive communication styles and how to work with personalities that are different from their own. The project also served as a way for the youth to learn about environmental leadership and the Sicilian teens spent several days at the Jersey Shore doing hands-on activities, like seining and clamming, at Island Beach State Park. These activities offered the youth a better understanding of innovative approaches in waste management and industrial pollution, two environmental problems being experienced by Sicily.

“Seining and clamming taught them about healthy ecosystems and while they worked to maintain paths to the beach through dunes, they learned the importance of a healthy dune system in protecting communities,” explained Torretta. “The hope is that in their visit to America, the youth will be inspired to return to Sicily and implement their “Big Idea” to help their communities.”

One week of the Youth Leadership Program was devoted to a visit to Washington, D.C., meeting with U.S. Representative Scott Garrett of New Jersey’s 5th congressional district, learning about democracy and touring the various memorials in the nation’s capital. 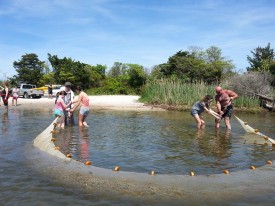 Seining at Island Beach State Park is one way to check the health of a bay ecosystem.

Youth Leadership Project participant Caterina Burgio, who was on her first trip to the U.S., said, “In America, I realized that everything is possible. If you have a dream, you can really make it happen! All you need is a lot of passion, a method and people who believe in you and support you.”

“In America I had the opportunity to make some really good friends and some extraordinary mentors that I know will always be by my side to make my dreams become reality.”

The three week visit to the U.S. was not all work, however, said Torretta. The Sicilian youth spent two days in the Big Apple shopping, attending the Broadway musical, “Les Misérables,” visiting the Statue of Liberty and looking up family at Ellis Island as well was enjoying the popular sleepover experience of a night at the Museum of Natural History.