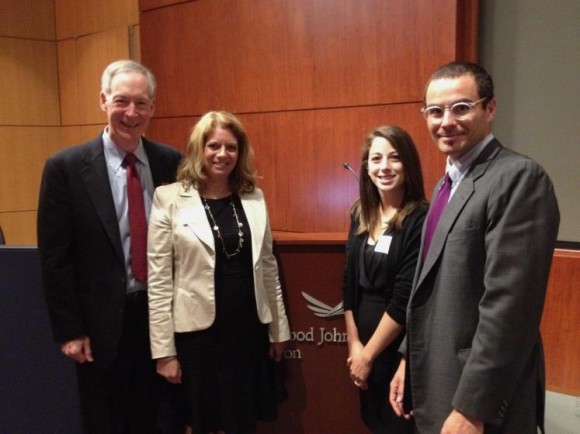 On June 20, the Robert Wood Johnson Foundation (RWJF) hosted a new national initiative, Culture of Health Forum, at its headquarters in Princeton, NJ. This special forum for statewide stakeholders featured two panels of leaders and experts in the health field and focused on a discussion on how a culture of health in America can be achieved.

Peter Gillies, founding director of the New Jersey Institute for Food, Nutrition and Health (IFNH) at Rutgers served on the first panel, which addressed the question, “How do we motivate and support individuals to live healthy lives?” He talked about the importance of modeling the behavior you want through peer-networking. Gillies offered the institute’s new Student Ambassador Program as an example of peer-networking and how it contributes to the student experience at Rutgers. Also representing Rutgers at the forum were Peggy Policastro, director of the IFNH’s Ambassador Program, and Mary Tursi, one of institute’s newest student ambassadors, who was asked to contribute information on healthy snacks for college students. Policastro is also a professor of Nutritional Sciences at Rutgers and director of the Healthy Eating Courtyard & Nutrition Education at the institute.

The second panel addressed the question, “How do we create the infrastructure to promote a culture of health?”

According to Gillies, there was “much anticipation and excitement amongst panelists and participants alike surrounding the vision of working together as a community to achieve an overall healthier state and country.”

“The vision of the forum was in line with IFNH’s core values of community responsibility, collective success and interdisciplinarity,” he added.

RWJF’s Culture of Health vision was launched at the annual Aspen Ideas Festival convened by the Aspen Institute in Colorado and held this year from June 24-July 3.