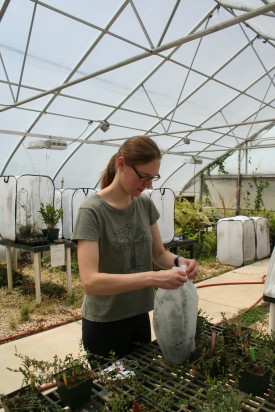 The gypsy moth is a destructive insect pest infesting New Jersey’s forests, destroying thousands of acres of trees. In the New Jersey Pinelands, the gypsy moth is also an occasional pest of cranberries. Gypsy moth caterpillars will readily eat the plants in outbreak years, when they are abundant in the Pinelands, like in 2007. The caterpillars prefer to feed on oaks, but when they encounter cranberry plants, their presence can have a devastating effect. Fortunately, since 2007, the caterpillars have rarely been seen in the New Jersey Pinelands. However, this doesn’t mean we shouldn’t be prepared for their eventual return. Also, studying cranberry resistance against gypsy moth will teach us about the resistance of the plants against other important pests as well.

At the Rutgers Marucci Cranberry and Blueberry Research Center in Chatsworth, NJ, studies led by postdoctoral student Elvira de Lange are currently testing the insect resistance of seven varieties of cranberry, including the widely used Stevens variety and newer varieties such as Crimson Queen and Demoranville. De Lange started off wrapping the different plants in white polyester sleeves and adding a number of gypsy moth larvae that just hatched from the egg. A week later, she retrieved the larvae from the plants and weighed them, to evaluate whether or not they grew well on certain plants. Also, she scored the damage the gypsy moth evoked, as a measure for plant resistance. She is still evaluating the data, in order to know if certain cranberry varieties are more resistant than others. 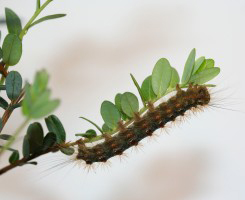 But what does plant resistance consist of? De Lange took a number of leaves from the gypsy moth-infested plants for analysis of toxins. Also, she is studying the volatiles or aromas that gypsy moth-infested plants emit. These aromas may have a detrimental effect and guide herbivorous insects to the plants. However, the aromas may also have beneficial effects and attract the natural enemies of herbivores (predators and parasitoids) or repel herbivorous insects. De Lange will identify the aromas each cranberry variety emits, and also study the effects that these aromas have on different insects.

Altogether, it is important to know which cranberry varieties are resistant against gypsy moth and other caterpillar pests, and what factors account for this resistance. This information may help us develop new varieties with improved resistance qualities.