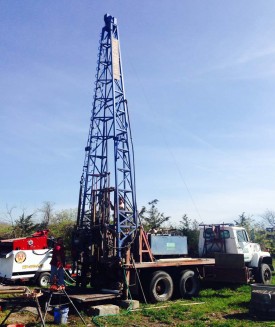 Core samples being collected by the Rutgers research teams

Rutgers scientists from the Institute of Marine and Coastal Sciences and the Department of Earth and Planetary Sciences have been looking to the past to understand our future here in New Jersey. Over the last few years, Rutgers has assembled an international “dream team” of sea level scientists and they have been working to understand the past sea levels of New Jersey. Their recent work has shown that geological and historical sea-level records show a significant rate of increase in sea-level rise since the nineteenth century. In New Jersey, it is extremely likely that sea-level rise in the twentieth century was faster than during any other century in the last 4.3 thousand years. Accounting for regional and local factors, the team projects sea-level rise in the mid-Atlantic U.S. most likely to be about 38-42” over the twentieth century, but possibly as high as 66-71″. This has significant implications for future generations and the infrastructure investments required to ensure the societal and economic strength of New Jersey.