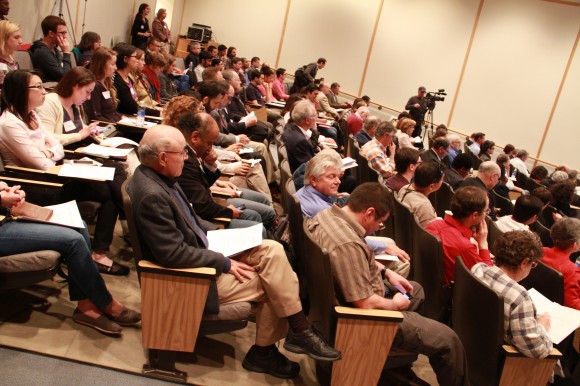 The REI Symposium provides a forum for representatives from various disciplines to examine energy issues.

Since its establishment in 2005, the Rutgers Energy Institute (REI) has set a high bar when it comes to sustainable energy and public discourse with national energy leaders in research and policy such as Steven Chu, former Secretary of the U.S. Department of Energy and Congressman Rep. Rush Holt, U.S. Representative from New Jersey’s 12th Congressional District in attendance at its annual symposium. For these past nine years, the institute has been committed to facilitating fundamental and applied scientific research, and progressive energy policy that promotes sustainable energy production compatible with economic growth and environmental vitality.

To promote meaningful dialogue and understanding of the complex technical and societal issues related to sustainable energy, this year’s event, the Ninth Annual Rutgers Energy Institute Symposium, was held on May 6 to a full house at the Fiber Optic Auditorium on the Busch Campus. It focused on the challenge of transitioning to a new world paradigm in energy science, economics and engineering, in conjunction with the need to engage the public in creating progressive energy and climate policy. 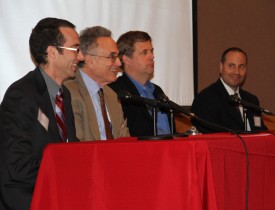 “The panel of distinguished speakers shared with us their understanding of the challenges that we face in developing sustainable, affordable and non-polluting sources of energy,” said REI’s founding director Paul Falkowski, Rutgers Board of Governors Professor in Geological and Marine Science.

Falkowski highlighted Rutgers expertise in biofuels, photovoltaics, energy storage, catalysis, white LEDs, urban planning, wind energy and energy policy and characterizes REI as a place where faculty across the campuses can communicate with each other, develop new courses and integrate research.

“We would like it to be the spark plug or major spark plug for development of innovation in the state,” he said. “The REI is really our face to the nation, in term of this university, and its ability to solve energy problems for this state, for the nation, and frankly to be an example, in my mind, for the world. So we are a solutions-orientated group.”

The day’s event featured four presentations and a moderated round table discussion with the audience. Presenters included speakers from government, academia, and the financial industry including Congressman Rush Holt who spoke on “Energy Change in a Reluctant Country.”

Rep. Holt spoke of the key role of the federal government in establishing new guidelines and regulation—much as the nation did for civil rights and gender equality—and the importance of engaging the public and our public officials to break through to create transformational energy and climate policy, especially in light of the recent release of the Intergovernmental Panel on Climate Change (IPCC) report. 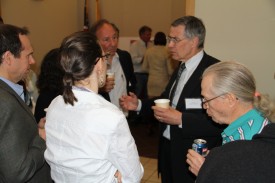 “What I retreat to often is history. This country has not done so well by accident. We have done well, I would argue, principally because of our representative government. The people, time and again, have gotten their representatives back on track.” Using the Civil Rights Act, as just one example, Rep. Holt said that “society has changed enormously and you can trace it back to the civil right laws and similarly in economics. We have not yet won the debate that federal investment in research, federal investment in science, is the leading indicator, not the trailing indicator, that that is what leads corporations and businesses to change their practices. Not just because of the fruits of the federally funded research but because of the competition that is set up by the federally funded research.”

Among the symposium presenters were Managing Director and Group Head, U.S. Power and Utilities, RBC Capital Markets Frank Napolitano, who spoke on “What’s New in Energy Finance?;” Director of the Center for Energy, Economic and Environmental Policy at the Rutgers Edward J. Bloustein School of Planning and Public Policy Frank Felder on “Will the Potential for a Death Spiral in Electricity Rates Hinder Transformation of the Electric Power System?;” and co-Director, Carbon Mitigation Initiative and Director, Climate and Energy Challenge, Princeton Environmental Institute at Princeton University Robert Socolow on “Technology, Policy, and Values for Living in a Greenhouse.”

Innovative research and technological advances can help the United States to reduce its dependency on fossil fuels. Yet at this critical juncture in history, the symposium aimed to bring together scholars, policy makers and practitioners to address the need for policy imperatives to provide pathways for an energy future that sustains economic growth and preserves the integrity of our environment. The REI Energy Policy Seminar Series, now in its third year, will continue this conversation in the Fall of 2014. 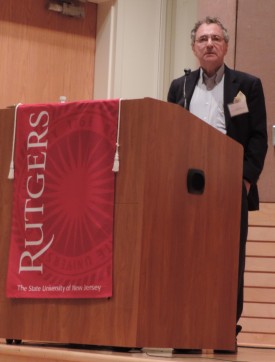 Of equal importance to the REI is the role of education and public awareness of energy conservation and research by way of its outreach and educational programs. During the symposium, awards were presented to the winners of the undergraduate Energy Innovation Contest, which is sponsored by the institute. The contest encourages students to develop plans to reduce energy consumption and promote eco-friendly practices on campus. First place winners, who received a $2,500 prize, were Material Science and Engineering majors Joe Woo, Matthew Lu and Moiz Rauf for “Underground Thermal Energy Storage for a Sustainable Future.” Second place winner of $1,500 was Rachel Alm, double major in Environmental, Policy, Institutions and Behavior, and History, for “Rooftop Gardens.” Third place winners who shared the $1,000 prize were Rachit Mehta, Material Science and Engineering major with a minor in Economics, and Timothy Yong, Computer Engineering and Computer Science major, for “Energy Recycling.” Contest presentations and proposals are available on the REI website. 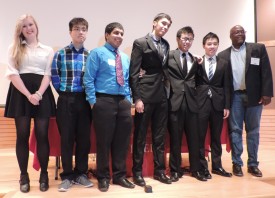 Two-time top prize winner of REI Energy Contest Abdul Moiz Rauf (Class of 2015) said, “What I love most about this contest is that it demonstrates that there is still plenty of low-hanging fruit when it comes to energy conservation. In an age where hundreds of millions of dollars are being funneled into the latest Silicon Valley innovations, I think it’s important to recognize that some of the most practical schemes are already right under our fingertips – it’s just a matter of finding out what they are and how we can implement them.”

Fellow teammate and first prize winner Matthew Lu (Class of 2015) said, “The energy contest is great because it has a two-pronged approach for attacking the ever growing energy issue. Rather than just focusing on innovating new ideas for energy conservation, it also aims to educate the public about their energy consumption habits in order to truly secure a sustainable future.”

This annual energy symposium provides faculty, students, staff, government officials and community members the opportunity to learn about new methods, processes and initiatives being developed by energy thinkers at Rutgers, the State of New Jersey and across the U.S.