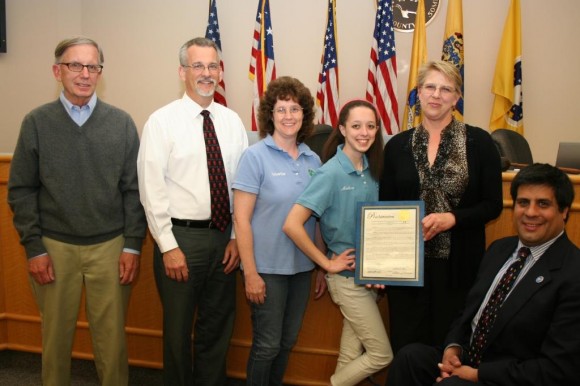 This recognition was followed on Wednesday, May 14, with the official planting of a Rutgers dogwood variety Hyperion®, in collaboration with the Building and Grounds Committee of the Somerset County 4-H Association.

This dogwood, which was planted in front of the Somerset County 4-H Center to commemorate the 100th anniversary of Cooperative Extension, will serve as a legacy planting for the centennial celebration as well as a reminder of the incredible work of Elwin Orton, professor emeritus of plant biology and pathology at Rutgers, and his many achievements in the dogwood and holly breeding programs at the university.

Orton, who was inducted into the New Jersey Inventors Hall of Fame in 2012, was credited with “saving the U.S. dogwood industry” with new strains of hardy, disease- and pest-resistant hybrid dogwoods when diseases and insects threatened the native species of the popular flowering tree. 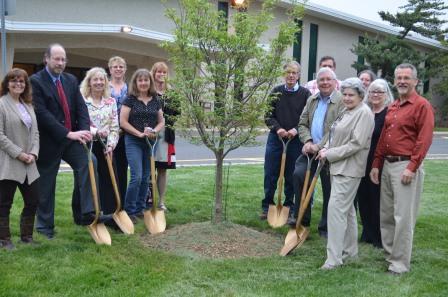 “These awards cover all of my work so it makes me feel confident for once in my life that my career as a plant biologist was successful and I did make an impact in woody ornamentals,” Orton said at the time. “So I am very, very pleased. It gives me great pleasure knowing that millions of people are enjoying my new dogwoods.”

Orton has earned more than 15 patents, with more pending, for new strains of dogwoods and holly that he developed over his four-decade career at Rutgers. The university estimates that the retail value of his creations is greater than $200 million and licensing royalty proceeds to Rutgers exceed $1.9 million.

Dogwood lovers have embraced Orton’s hybrid varieties as being unique, both with flowering and form, which are significantly improved compared to the native American dogwood. Rutgers hybrid dogwood varieties have earned a reputation for improved performance as landscapers and gardeners now recognize Rutgers dogwoods to be highly resistant to the dogwood borer, while displaying significantly improved resistance to powdery mildew and dogwood anthracnose.

Hyperion® is the most recent commercial release from Orton’s famed hybrid dogwood breeding program at Rutgers University. Among this variety’s many coveted qualities is its profuse white flowers (bracts), attractive strawberry-like fruit during the fall months, extreme vigor and rapid growth, tolerance of drought conditions and high resistance to the diseases powdery mildew and anthracnose. In fact, no insect or disease problems have been observed during the almost 30 years since the original Hyperion® hybrid seedling was established in the field.