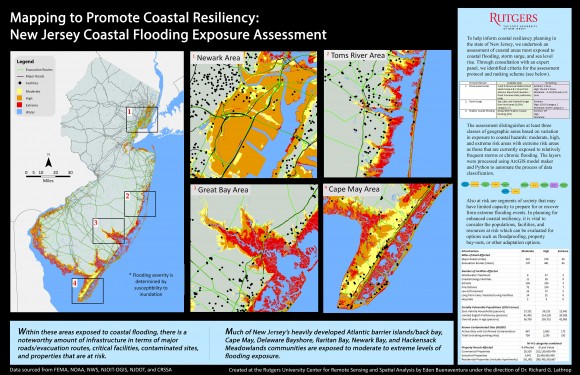 Buenaventura won the 4th Annual Gail P. Carter Science Award for her entry, “Mapping to Promote Coastal Resiliency: New Jersey Coastal Flooding Exposure Assessment,” which was produced at CRSSA, under the direction of Richard G. Lathrop, Jr., a professor in the Department of Ecology, Evolution and Natural Resources. 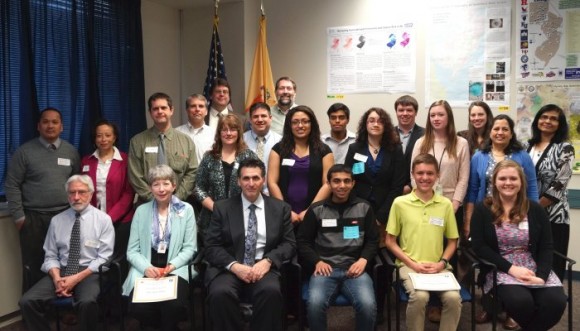 In addition, Buenaventura won second place for Best Analytical Presentation, judged for general quality of the map and other criteria that included communication of the problem to be solved as well as complexity and logic of analysis. Buenaventura also took second place in the Newbie of the Year category, which judged the best overall map by a newcomer to GIS.

Lathrop praised Buenaventura’s entry, which not only reflected the theme of the competition, “GIS – Keeping NJ Safe,” but distilled the complexity of coastal flooding vulnerabilities identified in a New Jersey Coastal Flooding Exposure Assessment conducted by CRSSA and other partners into an award-winning map.

“Eden has done a masterful job of condensing the results of the assessment into a one-page map,” said Lathrop. “The New Jersey Coastal Flooding Exposure Assessment was undertaken to identify and highlight those areas of the state’s coast that are most at risk to sea level rise and storm surge.” An interactive mapping website, NJFloodMapper.org, is hosted by Rutgers and is available for scientists and the public to visualize the state’s coastal flooding hazards and threats of sea level rise.

Copies of the maps in the statewide NJDEP competition will be on display at the NJDEP for some time. The competition offered awards in the following categories: best data integration, best small format, best instructional presentation, best software integration, best analytical presentation and most unique. The competition also judged the map that best signifies the use of GIS in security, safety and/or protection of the public and/or the environment. Learn more about the NJDEP GIS Mapping Contest.