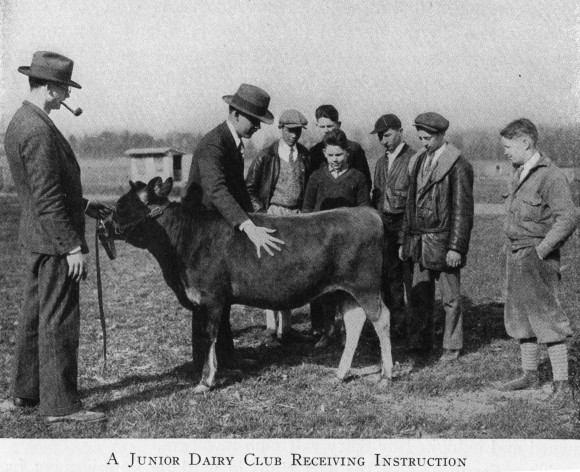 President Woodrow Wilson signed the Smith-Lever Act into law on May 8, 1914, providing for the organization of Cooperative Extension at county, state and federal levels. The act provided funding and a structure for outreach endeavors at the land-grant universities founded by the Morrill Act of 1862. Each state’s government had to accept the federal act before it could be implemented in its jurisdiction.  In New Jersey, the provisions of the act were accepted by the state legislature in 1915. The Trustees of Rutgers College were authorized to receive the funds and to organize and conduct agricultural extension work in the College of Agriculture (now the School of Environmental and Biological Sciences).

But even before the Smith-Lever Act, the seeds for Extension had been sown by a “see-for-yourself” demonstration movement for farmers and rural families that took hold in the late 19th and early 20th centuries. Some of the early pioneering educators were Seaman A. Knapp, A. B. Graham and Booker T. Washington.

These educator’s ideals transformed the way land-grant universities saw their roles. The move toward a model of Cooperative Extension education allowed for professional educators to be placed in local communities, with the mission of improving lives.

Specifically, the Act stated its purpose as aiding, “in diffusing among the people of the United States useful and practical information on subjects relating to agriculture, uses of solar energy with respect to agriculture, home economics and rural energy, and to encourage the application of the same, there may be continued or inaugurated in connection with the college of colleges in each State, Territory, or possession . . .”

The act is named for Senator Hoke Smith of Georgia and Representative A. F. Lever of South Carolina, who introduced the legislation.

Cooperative Extension is a unique educational partnership between the U.S. Department of Agriculture and the nation’s land-grant universities that extends research-based knowledge through a state-by-state network of extension educators. For 100 years, the Smith-Lever Act has stimulated innovative research and vital educational programs for youth and adults through progressive information delivery systems that improved lives and shaped a nation.

In New Jersey, Cooperative Extension is part of the Rutgers University – New Jersey Agricultural Experiment Station located at the School of Environmental and Biological Sciences and is supported by funds from county, state and federal governments as well as contracts and grants, private donations and service fees.