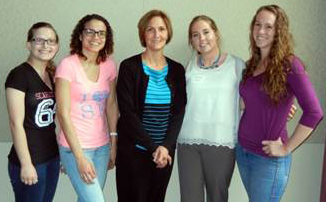 About 20 percent of the graduating seniors in the George H. Cook Scholars Program in 2014 are Animal Science majors!

As in the past, the Department of Animal Science actively supports the George H. Cook Scholars Program, with many faculty members serving as committee members, project advisors, reviewers and session chairs. Most importantly, with the department’s curriculum emphasis on experiential learning, the Animal Science undergraduates are encouraged to become involved in faculty research. By the time they are rising seniors, many are ready to conduct an independent honors project.

See the following tribute to these 11 students affiliated with the Department of Animal Science and their project titles. Photos of those seniors who defended their theses on April 22 are featured in the 2014 Animal Science G.H. Cook Scholars. Read more about the 2014 George H. Cook Scholars in the SEBS/NJAES Newsroom.