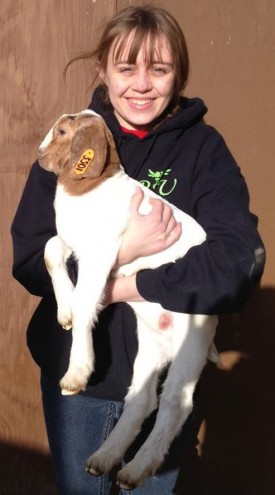 On the verge of graduation, many college students ponder whether all their hard work will pay off. As they cross the threshold bearing their undergraduate degrees, will their dedication open doors of opportunity? Rutgers graduate Nora Jean Nealon’s (SEBS 2013) path of hard work has landed her in a laudable position. On the heels of a remarkable undergraduate career at Rutgers, she is embarking on an equally impressive graduate career at Colorado State University (CSU), after taking a gap year to work closer to home. Nealon graduated valedictorian of Rutgers School of Environmental and Biological Sciences (SEBS) Class of 2013 with a 4.0 GPA, with a triple major (animal science/prevet, nutrition and biology) and a double minor (endocrine physiology and companion animal science). In fall 2014, Nealon will attend CSU’s 7-year DVM/Ph.D. program, with full financial coverage through both graduate and veterinary school.

The veterinary program at CSU’s College of Veterinary Medicine and Biomedical Sciences consistently ranks among the top three in the nation. Admission to the DVM/Ph.D. program is highly competitive, with CSU selecting only one or two highly qualified applicants to the program each year. The selection committee seeks students with a demonstrated interest and aptitude for research, as evidenced by continued involvement in research labs or field projects during their undergraduate career. Nealon fulfilled those requirements and then some, with her path of hard work and accomplishment already forged from her days in high school.

Nealon graduated first in her class with a GPA of 5.04 out of 4.60 from Howell High School in 2009 and joined the SEBS four-year General Honors Program, which invites only highly motivated and promising high school seniors to participate in interdisciplinary seminars and a graduated introduction to research.

While Nealon maintained a perfect 4.0 GPA, she supplemented her course work with multiple research projects, serving as a research assistant at the Center of Alcohol Studies and the Department of Animal Science. Nealon has also served as a student-teacher in four honors classes with Professor Timothy Casey. He sees Nealon as not just about “the books,” but also as a caring individual. “Nora Jean is really a treat to work with. She is always available to help the students and they really love her. She is without a doubt the best undergraduate student I have been privileged to work with. She’s kind, generous, really smart and always there when someone needs her.”

Nealon completed a senior honors thesis through the George H. Cook Scholars Program with Assistant Professor Nicholas Bello from the Department of Animal Sciences. Her project, “Neural Consequences of Dietary Excess During Adolescence,” using the rat as an animal model, looked at the links between an adolescent high-fat diet, frontal cortex noradrenaline regulation and the tendency to binge-eat as an adult. 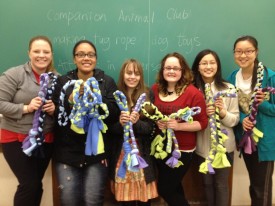 Nealon (third from left) with fellow members of the Companion Animal Club, showing the tug rope toys they crafted for dogs.

While balancing a full academic load, Nealon also found time to tutor chemistry/biochemistry at the Cook/Douglass Learning Center as well as serve as a private athletic tutor at the Hale Center. She also was a student instructor for several undergraduate courses, including biochemistry and physiology. For three years she worked for Residence Life as a Community Assistant in the first-year student dormitories.

Nealon combined her interest in animals into her extracurricular activities. Working with Animal Science Undergraduate Program Director Daniela Sharma, she served as founder and co-president of the Companion Animal Club, which sought to increase animal welfare awareness on campus. Off campus, Nealon volunteered and worked at Freehold Animal Hospital where she gained valuable hands-on experience to help prepare her for veterinary school.

Nealon displays an extraordinary ability to balance a full academic load with employment and extracurricular activities and her perspective is characteristically humble. “In all of my jobs, I am thankful I can play a small part in making people’s days better, whether it is encouraging my chemistry students or nursing a dog back to health.”

Nealon has demonstrated that she’s ready for the rigors of the joint degree program at CSU. “I chose to do a DVM/Ph.D. because I am interested in using animal models in research. Particularly, I hope to investigate the connections between nutrition, endocrinology and development.”

She adds, “a long term goal would be to improve dietary requirements of companion animals, leading to a higher quality of care in clinical settings. Having a broad veterinary background from my DVM will enhance my understanding of animal biology and make me more aware of current research influencing veterinary medicine, both of which will help me focus my doctoral research. That being said, during my clinical years of veterinary school, I hope to pursue a small animal track.” 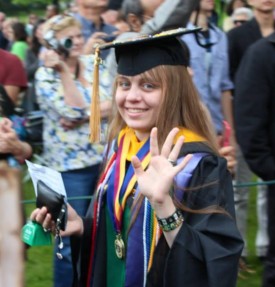 Nealon’s outstanding record might be easier to fathom if she had the cushion of family wealth or advanced education, but that’s not the case. “Overall, I am very grateful for the opportunity CSU is giving me. As the first one in my family to earn a bachelor’s degree, I am honored that I can set the bar higher for education. Working full-time as a student has made me more well-rounded and makes me confident I can handle the rigors of the program. It has also made me very thankful for the amazing financial support CSU is providing me.”

As this stellar student bids farewell to SEBS in the fall (Nealon continues to work part-time for the SEBS General Honors Program), Rutgers will remain a solid foundation for her great beginnings. “I chose Rutgers because of their reputation for involving undergraduate students in research, as well as their strong life science programs. If I had to go back to college and get my bachelor’s degree for a second time, I would pick Rutgers all over again!”