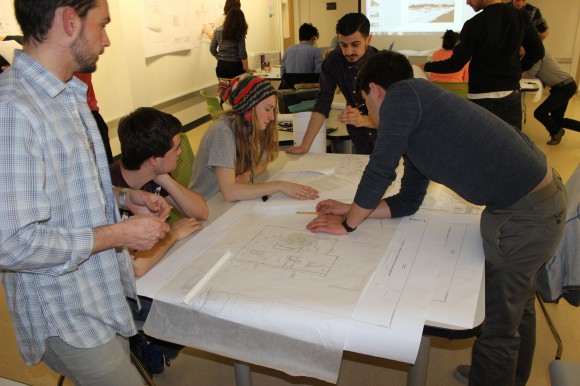 In March, the Rutgers Student Chapter of the New Jersey American Society of Landscape Architects (NJASLA) held a Design Charette—an intense period of design or planning activity—to come up with conceptual drawings for a new location of a family support center run by HomeFront, a non-profit organization located in Mercer County, whose mission is to end homelessness in Central New Jersey.

To facilitate its growing services for Central Jersey residents, HomeFront plans to move its “Family Preservation Center” to a new location in Ewing Township, an 8.24-acre property with several buildings that it purchased from the U.S. Navy.

The Rutgers student chapter of the NJASLA became involved in the design project after HomeFront approached the Executive Committee of the NJASLA, a national organization of landscape architects, for its help in designing the newly acquired property. The NJASLA deployed its Community Assistance Team, which met with representatives of HomeFront to learn of its priorities and plans for the property.

The Executive Committee of the NJASLA then brought this community assistance project to the attention of its student chapter at Rutgers. Excited at the prospect of collaborating with HomeFront in designing the newly acquired, the student members held a Design Charette at one of its campus meetings. The students formed teams, which were given no more than an hour and a half to come up with concept designs for the primary building on the property, which will serve as HomeFront’s Family Preservation Center.

NJASLA Executive Committee member Nick Tufaro (at right, next to the screen) joined Rutgers student chapter members at its campus meting to provide important details on the HomeFront property and the organization’s goals for its new center.

HomeFront plans to renovate this structure, which will greatly expand its center that provides temporary housing and support services to help homeless families in Central New Jersey and allow them to get a new start. Uses for several other buildings on the property have not yet been determined by the non-profit organization.

The renovated center will provide temporary housing for 36 families, a licensed daycare center for 30 children, an after-school care program, job placement services, GED services, computer training services and offices for HomeFront staff.  The concept designs produced by the Rutgers NJASLA Student Chapter at the Design Charette have been submitted to HomeFront and will be  consideration by the organization as it finalizes its plans for the center.