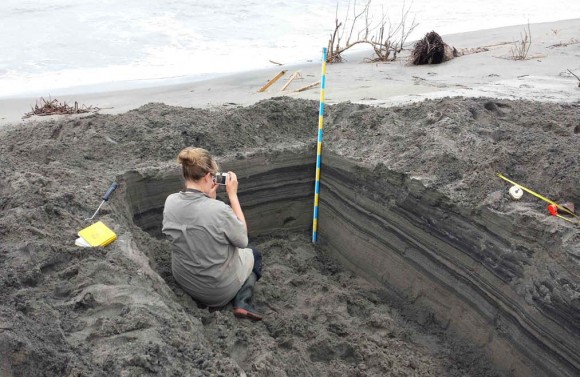 In November 2013, Typhoon Haiyan devastated the Philippines when it made landfall in Tacloban. It was one of the largest storms ever recorded in human history and resulted in the death of 6,000 people. Typhoon Haiyan represents a humanitarian disaster and a rebuilding challenge for the global community. In New Jersey residents’ experience with Hurricane Sandy in October 2012 drives home the scale of Haiyan’s power and its destructiveness.

A major obstacle in producing reliable predictions of catastrophic environmental changes is a lack of data on time scales longer than the short instrumental record. Despite the frequency of landfalling tropical cyclones in the Philippines, few studies have been published concerning the sedimentologic and geomorphic impacts of these events. Records of tropical cyclones, developed from the sedimentary deposits they leave behind, improve our understanding of processes and frequency by expanding the age range of events available for study. Storm surges associated with typhoons that make landfall have the potential to leave a signal within the sedimentary record.

A National Science Foundation RAPID grant (Grants for Rapid Response Research) was awarded to Rutgers School of Environmental and Biological Sciences Professor Ben Horton and Postdoctoral Associate Jessica Pilarczyk. As part of the grant, a field team consisting of members from Rutgers Institute of Marine and Coastal Sciences, including Pilarczyk and fellow postdoctoral associate Nicole Khan; Earth Observatory of Singapore; and University of Philippines – Diliman was dispatched to study the sedimentary fingerprint left by Typhoon Haiyan. This investigation will lead to improved understanding of the frequency of past typhoon events in the Philippines, as well as other storm-impacted coastlines.

While conducting their research, the team witnessed the human and environmental devastation first hand. Pilarczyk commented, “Fieldwork in Tacloban was both difficult and rewarding.  The storm surge that hit Tacloban was reportedly unprecedented for the region.  Many people did not evacuate because they did not have an understanding of what the term storm surge meant; had they been told tsunami wave, many of them say they would have understood the danger and, in retrospect, would have left.  Many that did evacuate to designated shelters died because disaster preparation for the region did not take into account a storm surge of this magnitude.  Our fieldwork brought us to the hardest hit villages where we interacted with the survivors on a daily basis.  A very memorable experience.” 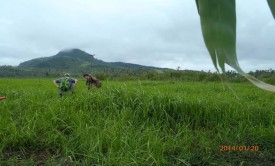 Pilarczyk believes the application of their findings is promising. “Data that we collected is currently being analyzed but will eventually be used to provide better storm records for the Philippines.  We found evidence of an older storm, similar in magnitude to Haiyan, that potentially could have forecast the severity of the recent Typhoon.”