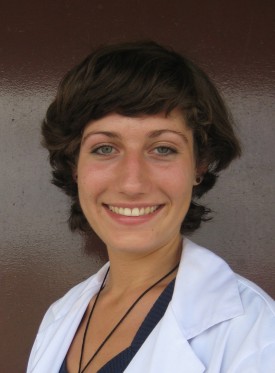 Brittany L. Graf, a graduate researcher in Plant Biology, was recently granted a U.S. Student Fulbright Institute of International Education (IIE) Award, which carries a 10-month stipend and travel support. Graf will travel to Ecuador from Sept. 2014 to July 2015 to conduct field and laboratory-based research on the medicinal properties of food crops as part of a collaborative project between the Universidad de las Americas in Quito and Rutgers. To further support her research project, Graf received the Anne S. Chatham Fellowship in Medicinal Botany worth $4,500 from the Garden Club of America to purchase research supplies for her project.

Graf conducts research in the laboratory of Professor Ilya Raskin in the Department of Plant Biology and Pathology. She specializes in the extraction and quantification of plant natural products and investigates their role in human health using enzymatic, cell-based and animal model systems. Graf’s doctoral thesis focuses on the fitness-enhancing, anti-diabetic, anti-obesity and dermatological applications of phytochemicals from quinoa seeds. She has received several awards to support her graduate work, including the 2012-2014 Robert and Lillian White-Stevens Fellowship to combat world hunger, the 2013 Eileen Brennan Graduate Research Award from the department and the 2014 Robert T. Rosen Memorial Scholarship in nutraceutical sciences. 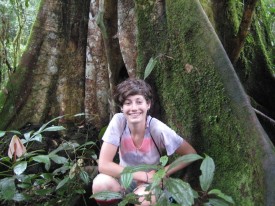 Graf as a rainforest conservation volunteer in Ecuador in 2008.

As a Ph.D. student, Graf led more than 11 training workshops in Chile, Bhutan, Kenya, Namibia and the U.S. on the extraction and pharmacological assessment of botanicals using rapid, simple field-deployable “screens-to-nature” (STN) technologies developed by the Global Institute for BioExploration (GIBEX).  As a Fulbright IIE Fellow, Graf will employ STN research technologies to conduct postdoctoral research on the medicinal potential of food crops in Ecuador.

Prior to starting her Ph.D. program Graf was a rainforest conservation volunteer for the Jatun Sacha Foundation in Ecuador. According to Graf, “Since that time, I have been dreaming of returning to Ecuador as a scientist to study the medicinal value of Ecuador’s natural resources in more depth.”

“I pursued graduate studies in the Raskin Lab specifically to gain the skills necessary to achieve that goal.  The Fulbright award will now provide me with that opportunity,” she added.