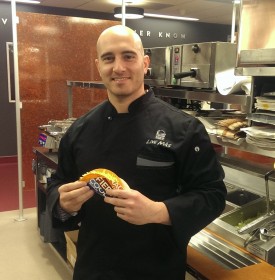 Steve Gomez in his test kitchen.

The next time you go into a Taco Bell, look for the poster promoting the Doritos Locos Taco and thank alumnus Steve Gomez for his role in making this wildly popular taste treat a reality.

An article in Business Insider describes it this way: “The Doritos Locos Taco is one of the most successful food innovations of all time. Taco Bell released the product in 2012 and sold more than a billion units the first year. The fast food company had to hire an estimated 15,000 workers to keep up with the demand.”

The distinctive orange shell – mimicking the Nacho Cheese Doritos corn chip – is filled with the traditional seasoned ground beef, lettuce and cheddar cheese in the “regular” version, and topped with chopped tomatoes and sour cream in the “supreme” edition. It looks like a very simple dish. But don’t tell that to Steve, who worked in test kitchens in Taco Bell’s Irvine, California, headquarters and manufacturing plants around the country for years to perfect it.

The challenges? First, stabilizing the delicate Doritos shell to be able to hold the taco ingredients and, believe it or not, figuring out how to apply cheese dust on the shells so that customers could get that telltale orange coating on their fingers as they do when scarfing Doritos.

According to Business Insider, the development process was painstaking and rigorous. And the result? The magazine quotes Steve: “When we shared the idea with consumers, they loved it. I was blown away with how immediately popular Doritos Locos Tacos became. The moment of truth was the reaction of our customers. When they gave it two thumbs up, we knew we had a winner.”

By the time of the national launch in 2012, millions of shells had been stockpiled throughout the country. Taco Bell changed is famous slogan (“Think Outside the Bun”) to “Live Mas” with the message, “Sometimes You Gotta Live Mas.”

Steve notes, “In the world of food product development, the amazing success of Doritos Locos Tacos may sound like one of those once-in-a-lifetime blockbuster products. But when you combine world class teams with a brand that embraces an innovative culture, as Taco Bell does, you will see a lot more blockbusters like this in the future.”

The collaboration between Taco Bell and Frito-Lay, which makes the Doritos brand, was a natural one. PepsiCo was the parent company of both until it spun off its restaurant division. Steve Gomez went to work for PepsiCo after his graduation from Rutgers in 2001 with a B.S. in Food Science. While he was working, he pursued his master’s degree in Food Science, completing it in 2010.

Steve didn’t come to Rutgers with Doritos Locos Tacos – or even food science – on the brain. As he describes it: “I grew up in Union, NJ, and chose Rutgers University because it is a great state school educationally and value-wise. I started at Livingston College, and I remember while I was in a business class, I started daydreaming about creating foods – things like food supplements for athletes or just new food products I wished I could buy.

“I started to listen to my gut and contemplated changing to a Nutrition major, but they told me I needed to speak to someone in the Food Science department. After talking to Prof. Ludescher (Richard Ludescher, professor of food science and dean of academic programs in the School of Environmental and Biological Sciences), I knew immediately this was exactly what I was interested in. The next semester I took the Fundamentals of Food Science class, and that sealed the deal.”

During his time at Rutgers, Steve found several mentors and relished the faculty involvement in his and other students’ progress. “The Food Science Department has excellent professors, and the best part is that students develop a family bond since we are a smaller group within the huge university.”

He recalls being inspired by many professors: Karen Schaich, who “had a unique and fun way to teach food chemistry, along with having a huge heart for her students;” Mukund Karwe, who “challenged us to think totally differently with his food engineering course;” Dr. Kit Yam, who “pushed us to be great presenters in his food packaging course;” and Beverly Tepper, who “got me interested in sensory evaluation of food and was an excellent mentor for me while I was completing my master’s requirements.”

Steve is especially grateful for the faculty support during his graduate studies. He says, “It was tough managing a full time job with graduate courses, but I was able to space it out enough that it was manageable and well worth it.”

His education and experience have led him to offer three “easy tips for future food product developers:

Steve says he would be very interested in mentoring students, especially at the high school level, “where most kids have no idea what food science is but would get interested once they learned about all the possibilities in the food industry.”

He points out, “Having a Food Science major allowed me to draw from a vast number of disciplines: chemistry, physics, engineering, biochemistry, etc., and apply them to understanding the physical and chemical makeup of food. I was always interested in science and innovation, but I also knew I didn’t want to be locked in a lab running experiments with harsh chemicals all day.

“Now,” he says, “I get to be a scientist with the additional perks of being able to work with food and food ingredients – and in most cases, I get to eat the ‘experiment’.”