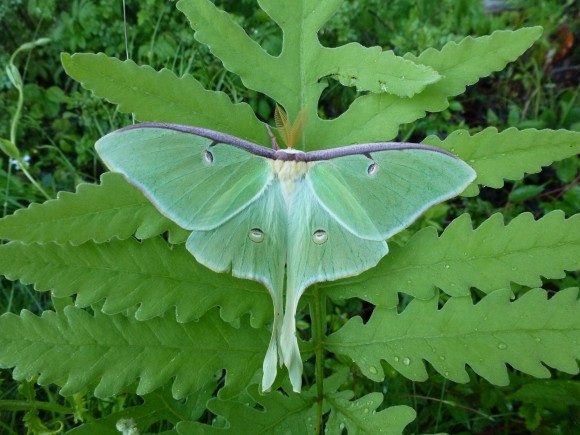 National Moth Week 2014 is designated “the year of the silk moth”. The Luna moth is a silk moth that can be found in New Jersey. Photo by David Moskowitz

As National Moth Week gains in popularity as it enters its third year, its Rutgers roots deepen further. The founders of National Moth Week are all tied to Rutgers: naturalist David Moskowitz is completing a Ph.D. in Entomology at the School of Environmental and Biological Sciences and Liti Haramaty is a marine sciences researcher at Rutgers Institute of Marine and Coastal Sciences. Moskowitz, Haramaty and several others with Rutgers connections are involved with the founding organization East Brunswick Environmental Commission and have turned local Moth Nights into a national spotlight on moths. This year, George Hamilton, chair of the Department of Entomology has joined the Science Advisory Board for National Moth Week. Other board members are from universities across the USA and other countries, as well as representatives from various nature organizations.

The third annual National Moth Week, July 19-27, a global event, will celebrate the beauty, life cycles, and habitats of moths, encouraging “moth-ers” of all ages and abilities to learn about, observe, and document moths in their backyards, parks, and neighborhoods.

National Moth Week (NMW) shines a much-needed spotlight on moths and their ecological importance as well as their incredible biodiversity. This nine-day global event encourages children and adults to become “citizen scientists” and contribute photos and data to online databases.

Haramaty is enthusiastic about expanding knowledge and changing people’s perceptions of moths. “The first two moth weeks were very successful. In 2013 there were over 400 events in 40 countries and thousands of observations submitted to our partner organizations. The main goal of the project is to contribute data to increase our knowledge on distribution and natural history of different moth species. With that we also hope that through participating in National Moth Week people will learn that moths are not only little brown insects that eat their clothes, but that moths are ecologically important, interesting and beautiful.”

NMW 2014 is designated “the year of the silk moth,” to encourage moth-ers to look for and learn about these fascinating moths in the Saturniidae family. National Moth Week’s symbol, the Automeris io, is a colorful silk moth found in the U.S. and Canada.

Silk moths are found throughout the world, but their populations recently have shown declines, according to NMW team member Dr. Elena Tartaglia, who earned her Ph.D. in Ecology from Rutgers and is currently an assistant professor at Bergen Community College.

“As scientists have observed the decline in Monarch butterflies as their habitat disappears, we need to pay attention to similar declines in the populations of other Lepidoptera, the insect order that includes moths and butterflies,” Tartaglia said.

A moth-ing event could involve turning on a porch light at night and watching what happens, or going outside in daylight to find caterpillars and diurnal moths. Participants can use ordinary light bulbs, UV lights, or mercury vapor lights to draw moths, or brush sweet moth bait on tree barks for a bigger response.

Through partnerships with major online biological data depositories such as BAMONA, Project Noah, Encyclopedia of Life, Discover Life, and iNaturalist, National Moth Week encourages participants to record moth distribution and to provide information on other aspects of their life cycles and habitats.

National Moth Week is a project of the Friends of the East Brunswick (NJ) Environmental Commission, a nonprofit organization dedicated to environmental education and conservation. The event grew out of local summer “Moth Nights” organized by David Moskowitz and Liti Haramaty of the commission since 2005. The events typically attract 30 to 50 persons, some with scientific backgrounds, but mostly local residents and their children who want to experience a unique nighttime nature activity.

“National Moth Week is helping to raise awareness about the amazing world of nighttime nature that many people have never observed,” said Moskowitz, an environmental consultant and graduate student in entomology at Rutgers University. “Thousands of photos taken by citizen scientists at mothing events have been uploaded to data depositories by participants. Through this event, we hope continue to expand our knowledge about moths and their role in the environment.”

Individuals, groups and organizations are invited to register events on the NMW website free of charge and have them posted on the NMW’s U.S. or international map. All registrants receive a certificate of participation.