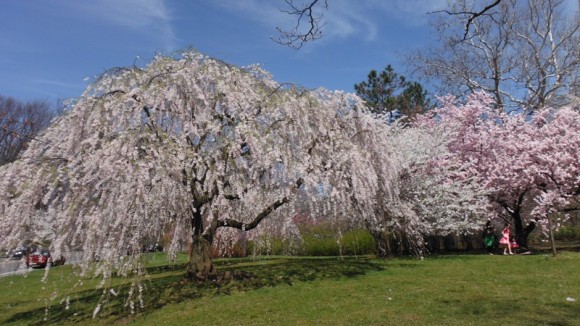 Cherry blossom time at Branch Brook Park in Newark, home to the largest collection of flowering cherry trees in the U.S.

Editor’s Note: Two alumni have been instrumental in the care and maintenance of the remarkable cherry tree collection in Essex County. Paul Cowie is a consultant to the Branch Brook Park Alliance. He graduated in 1985 with a B.S. in Natural Resource Management with a concentration in Forestry. He cooperates with the Rutgers Master Gardeners of Essex County and their advisor Jan Zientek of Rutgers Cooperative Extension of Essex County. Zientek is himself an alum – a 1982 graduate with a B.S. in Forestry and Wildlife Biology. The story of their work is featured here.

The emergence of cherry blossoms is renowned in Japanese culture as representing the end of the winter, the beginning of new life and the start of the spring growing season. Throughout Japan, cherry blossom festivals are celebrated under the trees with singing, dancing and elaborate tea ceremonies. While profuse and beautiful, cherry blossoms are relatively short lived. It is said that the Japanese use the example of the short lifespan of the cherry blossoms that vividly burst into life and then proudly whither to symbolically reflect on, and as a metaphor for, their lives. 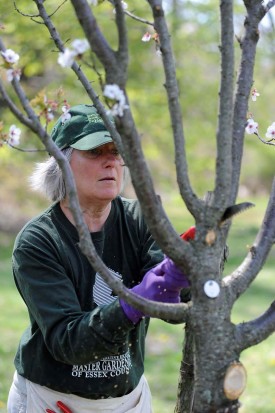 Fortunately for New Jersey residents, they do not have to travel to Japan or to the annual National Cherry Blossom Festival in Washington, D.C. to appreciate this brief burst of beauty. They can take a much shorter excursion to Branch Brook Park in Newark, home to the largest cherry tree collection in the U.S., and which welcomes thousands of visitors for the annual Essex County Cherry Blossom Festival in April.

While cherry blossoms may have a short lifespan, the average life expectancy for a flowering cherry tree is 30 years, but some live much longer. The oldest cherry trees in Branch Brook Park date to the 1920s, when business executive and philanthropist Caroline Bamberger Fuld donated 2,000 Japanese flowering cherry trees. This original collection eventually expanded to 3,000. Conceived in 1867 by Frederick Law Olmsted Sr., who designed New York’s Central Park, Branch Brook is the oldest county park in the U.S. The park underwent a period of neglect during the 70s and 80s as did the timeworn cherry trees.

That’s all changing, thanks to the efforts of the Rutgers Master Gardener program, whose volunteers are helping to “green” their communities all over the state. For the past two years, a volunteer crew of master gardeners from Rutgers Cooperative Extension of Essex County has taken over a significant portion of the upkeep of the cherry trees, pruning hundreds of the park’s current inventory of 4,300 cherry trees and donating hundreds of hours of volunteer labor. Since March 2012, the master gardeners have organized themselves into a pruning team, which assembles in the park every Wednesday morning with their own tools, barring heavy rain and temperatures below 45 degrees. So far, the group has pruned close to 1,800 trees. 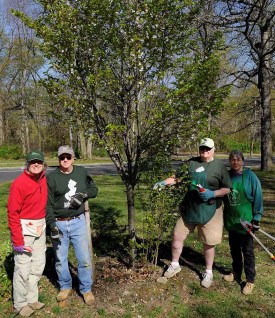 The pruning of the cherry trees in Branch Brook Park by the Rutgers Master Gardeners of Essex County is an essential component of the trees’ upkeep. L-R: Master gardeners Jean Grossman, Fred Solomine, Pat Hewitt and Suzie Yamarone.

On a recent Wednesday in March, the crew of Rutgers Master Gardeners worked quietly on a slope near the Stephen N. Adubato Sports Complex. The volunteers stretched and bent to remove undesirable or damaged tree limbs under the direction of arborist and Rutgers alumnus Paul Cowie (Cook ‘85), who is also the historic cherry tree collection manager for the Branch Brook Park Alliance. The alliance is a public-private partnership assisting Essex County in its efforts to restore the park.

“The Rutgers Master Gardeners are doing a great job,” said Cowie. “They all share a passion for gardening and they easily picked up all the fine details of pruning.” Cowie shared basic pruning techniques during two workshops for the master gardeners before they got started on the arduous task of pruning the mostly young cherry trees. Eventually, they will take up sculptural pruning of the more mature trees.

The cherry tree project began in 2011 as a way for the Rutgers master gardeners to learn about ornamental trees while fulfilling the community service requirements for all trainees or certified Rutgers Master Gardeners. But the original group Cowie trained “got hooked” and adopted the Branch Brook Park in Newark, said Jan Zientek, senior program coordinator of Rutgers New Jersey Agricultural Extension Station – Cooperative Extension in Essex County.

“They liked the work, and they liked what they are learning. On their own, they came up with the idea of helping the county as an ongoing project. These volunteers are also sharing their pruning knowledge and experience with residents of the county through education programs for homeowners,” added Zientek.

Even though the pruning of the cherry trees is a massive undertaking in itself, this year the Essex County master gardener volunteers expanded their involvement in Branch Brook Park to include general landscaping and maintenance of a particular zone in the park. In the north zone, the Rutgers Master Gardeners have focused on removing invasive plant species to allow plants from the original Olmstead design to reestablish themselves. According to the Branch Brook Park Alliance’s website, “The Olmsted Brothers’ firm laid out the cherry trees naturalistically on the tiered slopes along the narrow valley of the Second River, evoking the way the trees would be seen in Japan and distinguishing Branch Brook Park’s display from all others.” 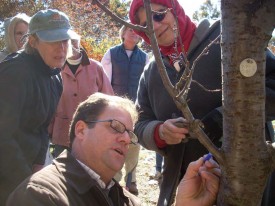 Despite the park’s impressive initial inventory of cherry trees from the 1920s, the accumulation of the 4,300 cherry trees currently in the park is the result of recent renovation efforts. When the Branch Brook Park Alliance was formed in 1999 to restore the park, it hired the landscape architecture firm of Rhodeside & Harwell to produce a cultural landscape report. As part of the report, Cowie’s firm, Paul Cowie and Associates, conducted a tree inventory in 2004 to 2005, which revealed that there were fewer than 1,000 cherry trees left. As a result, the Branch Brook Park Alliance and Essex County embarked on a extensive replanting program between 2006 and 2010, which brought the number of flowering cherry trees to its current level.

To experience the brief but dazzling appearance of the cherry blossoms at Branch Brook Park this year, the Essex County Department of Parks anticipates that its earlier-blooming trees will blossom in early to mid-April, with the majority of the trees blooming from mid- to late-April. The Essex County Cherry Blossom Festival runs from April 5-14 this year.