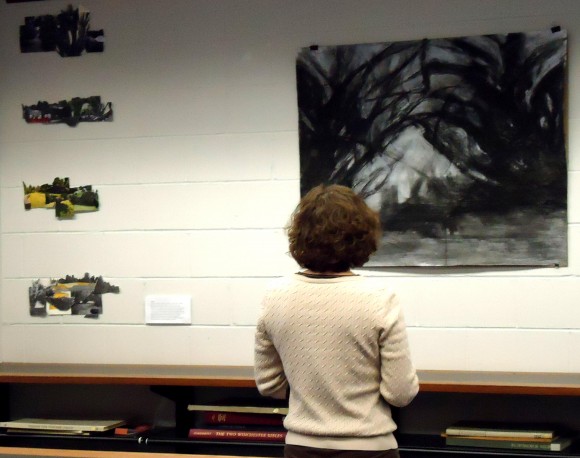 Department of Landscape Architecture chair Laura Lawson studies graduate student Jennifer Burkhalter’s charcoal interpretation of the Yew Garden at the Rutgers Gardens. The exhibit, titled SIGHT/SITE, was at the Rutgers Art Library in New Brunswick through the month of February.

SIGHT/SITE, a solo exhibit at the Rutgers Art Library on Voorhees Mall during the month of February, featured the work of Landscape Architecture graduate student Jennifer Burkhalter. SIGHT/SITE was a study of the Yew Garden at Rutgers Gardens and consisted of a series of charcoal drawings, three-dimensional collages and mixed media pieces. The Yew Garden consists of a series of tight, human-scale shadowed tunnels created by the branches of the yew that then open up into larger open and light-filled areas. As a result, the garden has a dramatic light and shade effect, which was a constant theme throughout Burkhalter’s work. The pieces in the exhibit were the result of her independent study, which was guided by instructors Holly Nelson and Kate Higgins of the Department of Landscape Architecture. 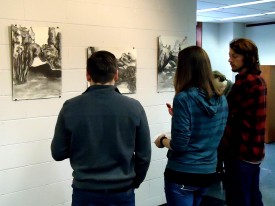 According to Burkhalter, the series of drawings depicted the evolution of drawing process and thought. Initially, she stood outside the tunnels looking at the yews from a distance and the drawings had little depth. Through continued drawing and further exploration, Burkhalter began to notice the twisted characteristics of the bark and moved into the yews, providing the perspective of being within the tunnel looking out. The series of work culminated in two large abstract pieces that emphasized the tunnel and light effects.

“In an effort to capture the depth of the garden, the collages were created by layering Xerox copies of photographs of the yews to create three-dimensional representations,” said Burkhalter. The hyper-contrast of the Xerox medium emphasized the extreme light and dark in the garden.

Burkhalter and her instructors paired with Megan Lotts, Rutgers art librarian, to bring this show to fruition. This successful collaboration led to Burkhalter giving a guest lecture about her exhibition to a School of Arts and Sciences Honors Seminar conducted by part-time lecturer Paul Blaney and focused on the relationship between the human and non-human world.

Burkhalter expressed the hope that “this exhibition will lead to more partnership between the Art Library and the Landscape Architecture Department.”