What will a rising sea do to our homes, businesses and the survival of our communities? Can we afford to pile enough sand on our shores to keep the ocean at bay? Beach engineering has been our only approach so far but is there something else out there to be explored? In Long Beach Island in NJ and the Outer Banks of North Carolina, surfers, politicians, scientists and residents are racing to answer these questions. While answers to these questions are yet to emerge, what’s generally agreed upon is that the development of our coastlines has put us in a tough predicament and it’s time to start looking for solutions. Shored Up is a documentary that asks tough questions about our coastal communities and our relationship to the land. 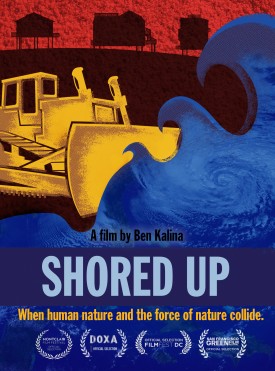 On February 24, Rutgers Climate Institute (RCI), in collaboration with the Cook Campus Dean and six other groups, co-hosted a film screening of Shored Up, which drew over 170 students, faculty and members of the public to the Cook Campus Center on the Rutgers New Brunswick campus. Shored Up is a documentary that focuses on the impacts and risks of sea-level change on coastal communities from New Jersey to North Carolina.  The film screening was followed by a panel discussion, featuring several experts who also appeared in the film.  Panelists included Tim Dillingham, executive director of the American Littoral Society; Benjamin Horton, professor, Institute of Marine and Coastal Sciences; Jeffrey A. Gebert, chief, Coastal Planning Section, U.S. Army Corps of Engineers, Philadelphia District; and Norbert Psuty, professor emeritus, Institute of Marine and Coastal Sciences. RCI co-Director Anthony Broccoli, professor of Environmental Science, moderated the panel. Read more about the film screening and panel discussion at the Daily Targum.