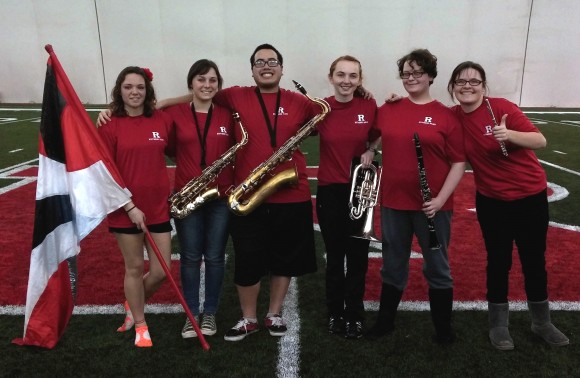 By Dorothy “Dory” Knipple ’17 (Animal Science)
Editor’s Note:  Dory is first-year student majoring in Animal Science. She works as an office assistant in the Department of Animal Sciences through the Federal Work Study Program.

The Rutgers Marching Scarlet Knights were chosen to represent New Jersey as a part of the New York– New Jersey theme for this year’s Super Bowl. We will be performing alongside Syracuse University’s marching band (which was chosen to represent New York) during the pregame show. Both bands will be performing as one for the show, which also has a New York–New Jersey theme. The Rutgers band, also known as “The Pride of New Jersey,” is made up of approximately 200 students from many academic disciplines. There are a number of SEBS students within the band, including six Animal Science majors: Sam Davis ’17, Carly Seldow ’17, Caitlin Kober ‘16, An Le ’16, Rachel Uhrig ’16, and me.

So far, being a member of the Rutgers Marching Band has been an amazing experience. One reason that I decided to join marching band in college is because I enjoyed performing in high school. But I also joined because a marching band is like a family. Being part of a group as large and as close as this band is, adds so much to my experience at Rutgers.

Although trying to balance our Super Bowl practices with our Spring semester classes has been no easy feat, I think I can speak for the entire band when I say that we are all extremely excited for this opportunity to perform at the Super Bowl. While I cannot reveal exactly what we are going to be performing on the field this Sunday (it’s a secret!), I think our pregame show will be fun for everyone to watch since the songs are recognizable and all the work that has gone into making this performance a success will show!

Dr. Carol Bagnell, our Animal Sciences Department Chair, understands our commitment and voices her support when she says: “These students are musician-athletes practicing, playing, and putting forward their best effort for each game. It’s great to see these talented students recognized by this Super Bowl invitation.”

Find out more ways in which Rutgers is celebrating the Super Bowl and watch below as the band rehearses for the big game. 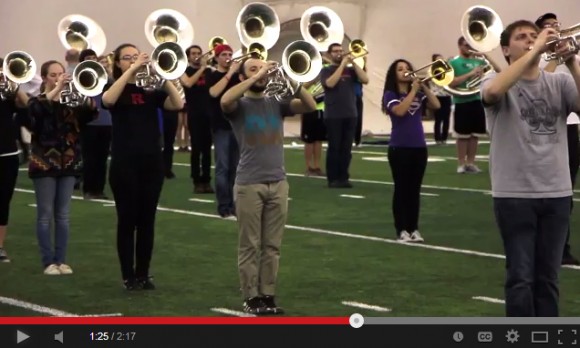