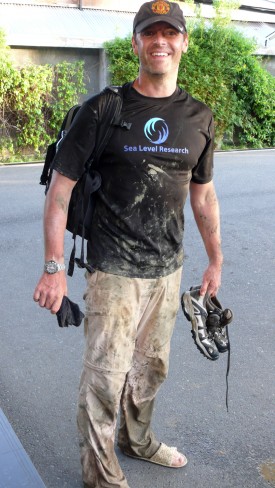 Prof. Ben Horton on the job.

Ben Horton, professor of sea level research at Rutgers Institute of Marine and Coastal Sciences, and his colleagues have shown that the rate of sea-level rise along the New Jersey coast is greater now than at any time in the past 2,500 years. In a new study published in ScienceDirect, a full-text scientific database offering journal articles and book chapters, researchers provided the longest continuous record of sea level and demonstrated a consistent link between changes in climate variability and sea level.

After correction for land-level subsidence, the research team found that sea level fell from 500 B.C. to 250 A.D. Starting in the 3rd century, sea level rose by about half a millimeter per year for 400 years at the beginning of a warm climate period known as the Medieval Climate Anomaly. There was a second period of falling sea level associated with a cooler period called the Little Ice Age that persisted until the 19th century. However, since the late 19th century, sea level has risen by more than 3 millimeters per year, which is the steepest rate for more than 2,500 years.

Read more on the study.