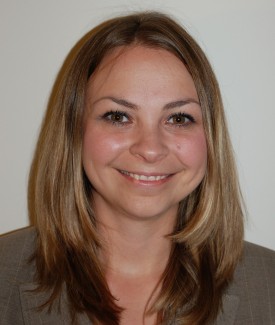 “I am extremely honored to be a recipient of the 2013 Gerald O. Mott Scholarship and be recognized for my accomplishments at the national level,” said Beirn. “It’s very humbling to receive an award named in memory of a pioneering crop scientist.” According to the CSSA, the award honors “the first CSSA President Gerald O. Mott, who trained 75 graduate students during his 45-year career at Purdue University and the University of Florida.” Beirn will be honored at the CSSA International Meeting on Nov. 6, 2013 in Tampa, FL.

Her research, which is conducted under the direction of Bruce Clarke, professor and chair of the Department of Plant Biology and Pathology and Jo Anne Crouch, researcher at the USDA-ARS, Systematic Mycology and Microbiology Laboratory, also includes investigating on several other important fungal diseases of turfgrass, such as rust and dollar spot.  According to Beirn, “my work in these systems has led to an increased understanding of pathogen biology, species boundaries, and improved diagnostic protocols.”

Beirn, who hopes to pursue a career in extension turfgrass pathology following the completion of her Ph. D., received her bachelor’s and master’s degrees from Rutgers University in 2007 and 2011, respectively.