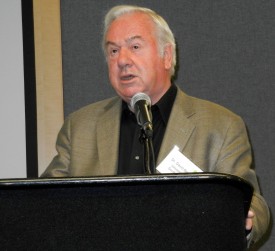 The late David Barker speaking at the 2011 Pioneers in Endocrinology Workshop.

Rutgers faculty, postdocs and students who attended the 4th Annual Pioneers in Endocrinology Workshop, “Developmental Programming of Adult Disease” in September 2011, remember listening to the riveting presentation of David J. P. Barker, M.D., then professor of Clinical Epidemiology at the University of Southampton, UK.

His 2011 lecture at Rutgers, titled “Chronic Disease Originates in the Womb,” told the story of the development of what is now known as the Barker hypothesis. Many of the workshop participants recall the conversations they had with Dr. Barker during the poster session or at lunch. Sadly, the pioneering epidemiologist passed away on August 27, 2013, at the age of 75. Read more on the life and work of Dr. Barker at the International Epidemiological Association. 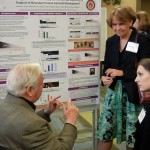 Barker was the first to demonstrate that low birth weight infants are at greater risk for developing coronary heart disease in adulthood. He subsequently showed that they are also at greater risk of stroke, high blood pressure and Type-2 diabetes. This led to his hypothesis that malnutrition in the womb and during infancy results in altered programming that permanently changes physiology and metabolism. During his talk at the 2011 Pioneers in Endocrinology Workshop, Barker argued that public health medicine is failing and that its cornerstone should be to protect the health and nutrition of young women before and during pregnancy to prevent chronic disease later in life. 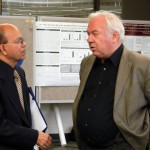 David Barker talks with Dipak Sarkar (left) at the 2011 workshop.

The Department of Animal Sciences and its partners in the annual Endocrinology Workshops, which just concluded its 6th annual event this year,  are grateful for the memories of Barker’s visit to the Rutgers campus in 2011.