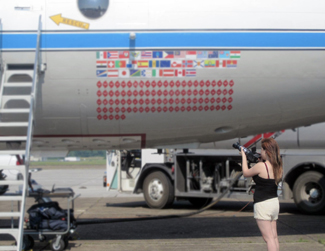 Filmmaking student Stephanie Wong filming one of the planes used to gather data about the atmospheric chemistry over the Southeast.

For six weeks this summer, Anne Marie Carlton, assistant professor in the Department of Environmental Sciences, led a multi-million dollar atmospheric study in the southeastern U.S., considered the largest air quality study in decades in America. While this world-class team was assembled to investigate various components of air quality over that region of the U.S., which has not warmed similar to the rest of the continental U.S. and the globe, it dawned on Carlton that this was an opportunity to use the power of film to document and communicate research on climate change. Read about the filming of the study by Rutgers Center for Digital Filmmaking.