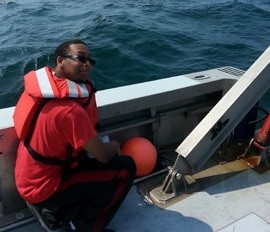 Undergraduate Brandon Rogers has just deployed RU-23, a Rutgers submersible robot glider, one of a dozen such gliders being deployed from Georgia to Nova Scotia as part of an effort to create an integrated ocean observatory for the coast.

Starting this September, an effort will focus scientists, including those from Rutgers Institute of Marine and Coastal Sciences, and their institutions to cover gaps in ocean geography and operations that until now have prevented scientists from seeing how the different ecosystems along the coast interact, and how and when animals move between them. The observatory will be integrated technologically and geographically. Read more at Rutgers Today.