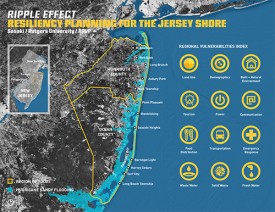 In early August, the federal Hurricane Sandy Rebuilding Task Force that’s charged with leading the federal government’s efforts to rebuild communities devastated by the storm announced the selection of 10 design teams that will proceed to Stage Two of REBUILD BY DESIGN, a regional design competition that will develop innovative projects to protect and enhance Sandy-affected communities. Stage One was launched in June this year and attracted proposals from 140 potential teams drawn from more than 15 countries.

Several Rutgers faculty members are involved in the design teams that have proceeded to Stage Two, which involves three months of research and analysis between August-October this year. The Rutgers faculty members include Steven Handel, Karen O’Neill, Chris Obropta, Christina Kaunzinger, Richard Lutz, and Joanna Burger, who will be assisted by other fellow Rutgers ecologists as the design process moves forward this fall. According to Handel, who directs the Rutgers Center for Urban Restoration Ecology, the design teams “are focusing on solutions for the New Jersey shore as well as ecological, social and economic ideas to secure a healthy future.” Read more at the U.S. Housing and Urban Development website.