When most people think of the Arctic tundra, they think of a vast frozen land with few signs of life. But when Max Häggblom, professor of biochemistry and microbiology at Rutgers School of Environmental and Biological Sciences, thinks of the tundra, he imagines a secret world, unseen by the naked eye, teeming with possibilities.

He and members of his lab have been collaborating with researchers at the Finnish Forest Research Institute, University of Jyväskylä and Rutgers Institute of Marine and Coastal Sciences to study microbes active in the frozen Arctic tundra. This effort, currently funded by the Academy of Finland, builds on previous research that explored the Arctic tundra to discover new and potentially beneficial microorganisms, biochemical pathways, genes, and enzymes. In the past, scientists have not focused on Arctic environments as a source for such organisms, but this area may prove to be fertile ground. “Arctic soils or sediments can be considered an extreme environment colonized by special microorganisms which are adapted to these ecological niches,” Häggblom explained. 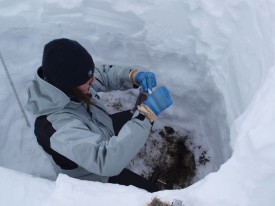 Sampling for microbes in winter.

Approximately one-fifth of the Earth’s land mass is composed of Arctic and boreal areas. These soils represent a massive pool of carbon that will likely enter the atmosphere (as carbon dioxide) when polar environments experience warming. Currently, a large portion of Arctic and boreal soil ecosystems are permanently frozen or only experience thaws for a brief time in summer. However, these polar regions are also subjected to the most intense global temperature fluctuations on the planet. Any temperature-induced changes in the frozen state of polar soils and wetlands could have a profound impact on microbial metabolism, increasing mineralization of accumulated carbon, which may lead to polar environments becoming a significant source of carbon dioxide to the atmosphere. A major limitation in forecasting the turnover of polar soil organic matter is our very incomplete understanding of the composition of Arctic and boreal soil microbial communities, their activity, and community dynamics, despite their critical role in carbon mineralization and potential impact on atmospheric CO2.

Häggblom and his colleagues are now working toward answering larger, ecosystems-level questions to identify the mechanisms that select for the bacteria communities active in Arctic soils, which experience long periods of extremely low temperatures and multiple episodes of freezing and thawing. Of interest is learning how global climate change might affect these environments, particularly on a microbial level.

Within tundra soils, there exist thriving communities of bacteria, fungi, and other microorganisms. Many of these microorganisms feed on organic matter and release carbon dioxide as a by-product in a process called carbon cycling. During warm periods, when organic matter is plentiful, more carbon dioxide is released into the atmosphere. However, researchers do not know what the effects of longer warm periods might be on these microbial communities, nor do they know what effect the microorganisms might have on the carbon cycle and global climate change. “Despite the critical role of Arctic and boreal soil microbial communities,” Häggblom noted, “very little is known about their composition, and more importantly, activity. Freeze-thaw cycles are thought to be a major physical driving force for microbial activity in polar soil environments. However, it is not known which members of the microbiota are active in carbon turnover. The microbial community that survives and is active will likely have a profound impact on the type and amount of organic carbon and nitrogen being mineralized.” 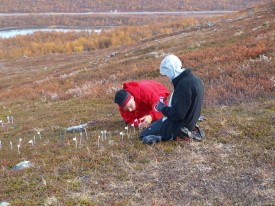 Max Häggblom and Minna Männistö “feeding” the soil microbial community during a field experiment on a tundra heath in northern Finland.

Häggblom and his collaborators recently discovered novel bacteria living in acidic tundra heath soils. The bacteria belong to the phylum Acidobacteria and may be major players in the global carbon cycle. Molecular analyses suggest a tremendous species diversity, but although ubiquitous in the Arctic environment, the ecological role of the Acidobacteria remains elusive. Häggblom and collaborators recently reported on the initial genomic analysis of three of these, named Terriglobus saanensis, Granulicella mallensis and Granulicella tundricola, which were sequenced by U.S. Department of Energy’s Joint Genome Institute. The genomic analysis will provide the researchers with the “blueprint” to monitor and quantify the functional genes involved in carbon and nitrogen turnover in Arctic soils.

“The genomic analysis will be integrated with our ongoing laboratory and field work to advance our knowledge of the relationship between microbial community composition and the activity and environmental conditions in Arctic soil environments,” Häggblom said. “This study will also have a broader impact by providing a basis for predicting the effect of long-term temperature changes and global warming on microbial activity in Arctic soils, including permafrost systems.” Ultimately, a detailed understanding of the dynamics and activity of Arctic soil microbial communities is needed for a predictive understanding of soil organic matter turnover and greenhouse gas flux from the terrestrial ecosystem.

Through this collaborative research, Häggblom and others are unlocking the mysteries of the Arctic.