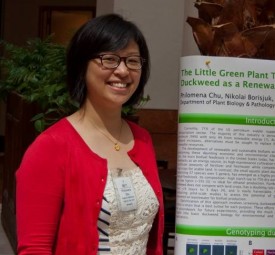 IGERT, which is an acronym for Integrative Graduate Education and Research Traineeship, is the NSF’s flagship interdisciplinary doctoral training program. Since 1997, the program has supported nearly 5,000 graduate students by funding over 200 IGERT projects at over 100 universities across the U.S. and Puerto Rico, including six projects at Rutgers.

Chu is affiliated with the Rutgers IGERT project on Renewable and Sustainable Fuel Solutions for the 21st Century, one of four IGERT projects currently active at Rutgers. These projects bring together faculty and students from diverse graduate programs across the four New Brunswick campuses to engage in research around specific research themes that transcends traditional disciplinary boundaries and are in emerging areas of national and global significance.

This year’s NSF IGERT Poster and Video Competition was a four-day online event that included 124 submissions, each representing a currently active IGERT project. It attracted over 39,000 unique visitors from 153 different countries, an additional 16,500 “Likes” on Facebook and received further coverage at sites such as Scientific American, Nature, Red Orbit, and Yahoo.

Among the 25 awards bestowed this year, Chu received both a “Judges Choice” and a “Community Choice” award, one of only two entries to receive an award in more than one category.  Her award-winning entry, “The Little Green Plant That Could: Duckweed as a Renewable and Sustainable Biofuel Feedstock,” is based on her doctoral research in the laboratory of Eric Lam, distinguished professor in the Department of Plant Biology and Pathology. Lam is also the principal investigator of the Sustainable Fuel Solutions IGERT Project and founding director of the Rutgers Duckweed Stock Cooperative.

Rutgers School of Engineering graduate student Andrea Gray, who is involved in the Integrated Science and Engineering of Stem Cells IGERT—another of the four IGERT projects currently active at the university—also received a 2013 Judges Award for “Improving Mesenchymal Stromal Cell Therapy.” This marks the second consecutive year of double recognition for Rutgers, as its two other active IGERT projects each received an award last year, “How the perception of movement drives social interaction” and “Plasmonics, the future of energy efficiency?”. 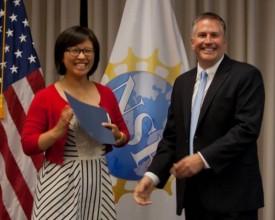 Chu, Gray and the other 2013 award winners were honored on June 10 at NSF headquarters in Alexandria, VA. There, they presented their posters and interacted with NSF staff from many directorates and disciplines during an extended poster session held in the headquarters’ large atrium, where their videos were also continuously looped on giant screens.

“The annual Online Poster and Video Session reflects one of the NSF’s core purposes in the IGERT Program”, said Lam, “namely to help students learn how to communicate their research clearly and succinctly to diverse audiences- everyone from fellow scientists and engineers in other fields, to teachers and students in grades K-12, to legislators, policymakers, and potential funders.”

“The students are challenged to capture the essence of their research in one poster and one video of less than 4 minutes and to target their presentations to people who are not necessarily experts in their own fields”, he added.

Philomena was an obvious choice to represent our IGERT project this year, because of her strong commitment to the research itself as well as to science outreach and education, “said Lam.

“Educating the public about my research is important to foster a greater understanding of the need for sustainable and renewable plant technologies and its implications,” added Chu.

Chu discovered her interest in plant biology through a non-traditional route. “My first undergraduate degree was in psychology. Without a clear career path in mind after graduation, I joined Americorps and volunteers with the GreenApple Corps in New York City.” This experience introduced Chu to community organizing but also to issues in urban forestry and ecological restoration.

“After my year with Americorps, I felt compelled to return to school to gain formal scientific training, which led to my decision to come to Rutgers for a second bachelor’s degree in Plant Science and to stay for graduate studies,” she added.

“I continue to be very committed to science education and outreach, and I want to generate more dialogue between the general public and scientists. I also aim to overcome stereotypes of scientists in the popular media, and to encourage younger women to become involved in science,” Chu elaborated.

Chu expressed great excitement about her research on duckweed, which she calls “a remarkable plant. It’s the world’s smallest flowering plant and can be found nearly all over the globe. It’s one of the fastest growing plants, can thrive even on high concentrations of pollutants while simultaneously remediating the polluted waters in which it grows.”

Duckweed has been used for decades in developing countries such as Bangladesh to purify wastewater and as feed for fish farms and livestock, and fertilizer for crops.  It has also attracted interest as a renewable feedstock for making bioethanol for transportation fuels, something that has become a major focus of the duckweed research conducted in the Lam lab in recent years. 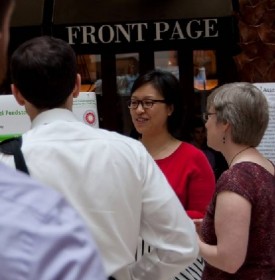 “Duckweed has all the attributes of an ideal biofuel feedstock,” Lam explained. “It does not compete with food crops such as corn and soybeans or with other land crops such as switchgrass. It does not need additional water for irrigation and needs little or no added fertilizers. It has abundant available starch (up to 50% dry weight) to convert to ethanol as well as low levels of the stubborn lignin molecules found in other feedstock candidates that need large inputs of energy and chemical resources to process,” he added.

“The prospect of coupling duckweed’s proven abilities for wastewater remediation with possible biomass production for biofuels made so much sense that I picked up this research again a few years back, after first having encountered duckweed as a graduate student 30 years ago,” said Lam.

Duckweed research in the Lam lab now spans an enormous range from bench-scale fundamental studies in molecular biology, genomics, and bioinformatics meant to identify the best strains of duckweed for biofuels applications to pilot-scale work on a demonstration and dual- purpose wastewater treatment and biofuels pipeline. Here in New Jersey, the group has been conducting ongoing research at the Pinelands Nursery and Princeton Meadows wastewater treatment facility. The research has international reach, as well, with recent collaborations in the Lam lab by a visiting scientist from Chengdu Institute of Biology, Chinese Academy of Sciences, and doctoral students from the University of Sao Paulo, Brazil and the University of the Witwatersrand, South Africa, all of which are international partner institutions of the Sustainable Fuels IGERT Project.

Since the awards ceremony, Chu has had little time to rest on her laurels. In addition to continuing her research both in the lab and in the field, Chu, Lam and colleagues are busy gearing up for the Second International Conference on Duckweed Research and Applications that Lam is co-organizing. The conference takes place at Rutgers on August 21-24, 2013.