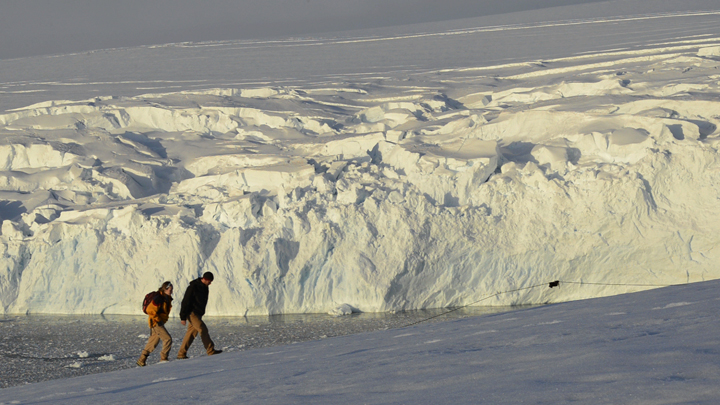 Students love science even when they aren’t science majors.  That’s what Rutgers University is discovering in a unique new program that bridges art and science through documentary film-making. At the Rutgers Center for Digital Filmmaking, non-fiction stories featuring world-renowned research supported by the National Science Foundation (NSF) are capturing the imagination of undergraduate film students.

As part of the making of an NSF-funded feature documentary, Antarctica: Beyond the Ice, 12 Rutgers students are taking film production classes and working with the Rutgers Film Bureau, the university’s professional documentary office within the Mason Gross School of the Arts, to learn about Antarctic science and storytelling for the screen.  Students working on this project will earn professional production credits as co-editors and assistant producers.

Some of this student work is captured in the documentary’s three-minute trailer, which features NSF funded scientists, polar research vessels and the research performed on the ice and beneath the frigid waters of the Antarctic Peninsula. The trailer is available on the project’s website Antarctica: Beyond the Ice, which includes a blog with entries by film students chronicling their experiences working on the project.

“Working on Antarctica: Beyond the Ice has provided me with an opportunity to challenge myself as a storyteller,” writes Rutgers film student Kyra Willans. “I’ve learned a lot about marine science and biology and I’m now faced with the task of relaying this material to a wide audience.”

The Rutgers Center for Digital Filmmaking has partnered with principal investigator Oscar Schofield at the Rutgers Institute for Marine and Coastal Sciences to produce Antarctica: Beyond the Ice. The feature film is designed for a wide television audience and focuses on NSF’s Long Term Ecological Research (LTER) Project at Palmer Station, on the West Antarctic Peninsula (WAP).  Seidel points out that researchers with the LTER are working collaboratively with the film students. Schofield, an expert on phytoplankton, “has come to our film center four times this past semester to teach students about the West Antarctic ecosystem.”

“We’re always looking for ways to connect our film students with important science,” said Seidel. “There are a lot of students in our program who used to be in the sciences. Many come to our film center because they are looking for innovative and dynamic ways to learn science – but also seek creative ways to use their knowledge to advance scientific literacy.”

This feature film will focus both on the scientific and exploratory aspects of the research supported by the Antarctic Program. “There are not many places on this planet that are truly untamed and explored,” notes Rutgers oceanographer Oscar Schofield in the trailer. “The ocean is one. And, in terms of landmass, the Antarctic is another.” 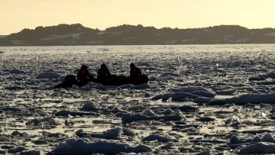 Researchers navigate the ice in a Zodiac craft. Photo by Chris Linder.

Antarctica: Beyond the Ice features scientists studying the complex ecosystem of the Peninsula—which supports the gamut of life from phytoplankton to seals, penguins and humpback whales—and the effects of ecological changes on the ecosystem caused by a well-documented warming of the Peninsula region in recent decades. As are all of NSF’s 26 LTER projects, the Palmer LTER is interdisciplinary in nature, focusing on such diverse disciplines as physics, chemistry, biology and ecology.

Dena Seidel, the director of the Rutgers Center for Digital Filmmaking and a co-principal investigator on the NSF grant, said that the film is only one of many “science-in-action” documentaries undertaken by the Rutgers Film Bureau that provides engaging new ways of learning through the art of filmmaking.

“We have to make sure that all the Antarctica: Beyond the Ice film students are learning about climate change and climate science from the best researchers available,” she added.

Palmer is one of the three year-round U.S. research stations managed by USAP, which is overseen by NSF’s Division of Polar Programs that coordinates all U.S. science on the southernmost continent and aboard ships in the Southern Ocean as well as provides necessary logistical support to carry out that science.

Film students are also conducting supplemental interviews with the principal LTER scientists, such as Hugh Ducklow of the Lamont-Doherty Earth Observatory at Columbia University, the lead principal investigator for the Palmer LTER.

The filmmakers also intend to highlight innovative new technologies, such as gliders—autonomous underwater vehicles—that are revolutionizing research methods. They also plan to highlight the importance of inter-disciplinary collaborations that are essential to understanding complex scientific and environmental problems.

Seidel said there is more than 300 hours of raw footage from the Antarctic expedition, from which students will shape scenes and help create the final 52 minute documentary. A total of 40 segments have already been storyboarded with a handful already completed.

The project is supported through a grant from NSF’s Education and Human Resources Directorate with logistical support from the U.S. Antarctic Program (USAP) as well as support from the School of Environmental and Biological Sciences at Rutgers.

Dean of Academic Programs from the Rutgers School of Environmental and Biological Sciences Richard Ludescher says he is supporting this inter-disciplinary project “because it creates novel ways for undergraduates to collaborate across disciplines and cross pollinate the best of our arts and sciences to create powerful and new pedagogical platforms.”

Antarctica: Beyond the Ice is much more than a film production; it is part of a larger undergraduate filmmaking curriculum and Seidel expects that the finished film will be ready for broad distribution in the summer of 2014.

“It’s certainly a slower process than if we were just a production company,” Seidel explained. “On the other hand, I’m certain we’re going to have a more dynamic film in the end because we are including the students’ youthful energy, curiosity and unique perspectives. And we will train a new generation of artistic science communicators in the process.”