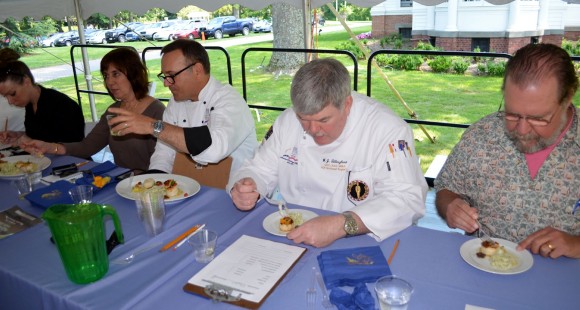 Gef Flimlin, at right, takes part in the judging panel for the 2013 Jersey Seafood Challenge.

Marine agent Gef Flimlin of Rutgers Cooperative Extension of Monmouth County was a member of a select panel of judges at the 2013 Jersey Seafood Challenge, where chefs vying for the state title to compete in a national competition create delectable dishes using Jersey Seafood. The competition was held on June 19 at Drumthwacket, the official residence of the Governor of New Jersey, located in Princeton.

New Jersey Secretary of Agriculture Douglas H. Fisher declared Christopher Albrecht of Eno Terra in Kingston the winner of the 2013 Jersey Seafood Challenge for his signature dish, Golden Tilefish and Green Vegetable Chowder. As the champion, Albrecht and his sous chef, John Crawford Koeniger, will be New Jersey’s official representatives at the Great American Seafood Cook-off in New Orleans in August.

Flimlin commented, “It was great to see tilefish being used by two different chefs in the competition. Tilefish had been a big fishery years ago, and having them back in the market is wonderful. It’s a testament to good fishery management and the chef’s appreciation of a fantastic fish.”

Secretary Fisher said, “New Jersey’s fishing and aquaculture industries are thriving, catching and growing some of the finest seafood in the world. Chef Albrecht will showcase our Jersey pride when he represents Governor Christie and the Garden State in the national cook-off this summer. Congratulations to all the competitors who prepared an outstanding lineup of dishes that demonstrated the superior quality of our sustainable bounty of Jersey Seafood and Jersey Fresh produce.” 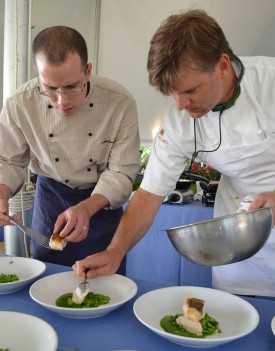 Albrecht grew up on Long Beach Island and attended the Culinary Institute of America. After graduation, Albrecht went to work in Manhattan at Danny Meyer’s world renowned Gramercy Tavern. There, he worked closely with “Top Chef” Tom Colicchio before assuming the role of Executive Chef at Craftsteak Las Vegas at the MGM Grand Hotel and Casino.

At Eno Terra, Albrecht said he focuses on high quality seasonal ingredients from small, family-owned farms and producers. He also oversees a two-acre farm that produces most of the produce used at Eno Terra.

“To be able to show off what New Jersey does best is quite an honor,” said Albrecht. “I used tilefish, an unsung delicious fish that has a rich crab flavor and a steak texture. The fish eats like an all-star.”

The Great American Seafood Cook-off is limited to 20 chefs with the champion being named King or Queen of American Seafood. The cook-off is televised by the Food Network and is part of the Louisiana Foodservice Expo. The event will take place on August 3 in New Orleans.

Flimlin highly recommends using Jersey tilefish for a tasty seafood dish. “It has the look and texture of cod but the flavor is better,” say Flimlin. His favorite way to prepare tilefish is poaching. “If you can get a whole tilefish and filet it yourself, take the body and make a court bouillon from it and then poach the fish in that. If the fish vendor does the fileting for you, you can ask for the body (cut off any blood lines, head and tail). Put the rest in a pot of water with cut up onion, celery and carrot, salt and pepper and other spices to taste, and boil, so that it reduces a bit. Then strain the broth and use to poach the filets. The broth can be frozen after use and reused or become the base for a fish chowder.”

As part of this year’s Jersey Seafood Challenge event, the Department of Agriculture kicked off a sensory evaluation project for New Jersey clams. Guests at the event were given samples of clams from the Great Bay, Sea Isle City and Highlands, and were asked to rate the clams on: saltiness, sweetness, chewiness, earthiness and the color of the meat.

“We hope to show consumers that there are differences in taste experience from clams grown in different areas of New Jersey, similar to oysters,” said Secretary Fisher. “In this way, we hope to bring a better understanding and appreciation for the quality and taste of Jersey clams.”

In addition to the clams, guests were able to try Delaware Bay oysters, including Cape May Salts. They were treated to a pairing lesson from Ventimiglia Winery from Wantage, NJ.

Also on hand was Michael Deeg of The Salt Creek Grille in Princeton, who created The Jersey Diner Martini, the winning cocktail of the 2013 New Jersey Restaurant Association’s Mixologist of the Year competition.

New Jersey’s seafood industry positively impacts the Garden State economy in many ways. In 2011, New Jersey fishermen reeled in 176 million pounds of seafood, valued at $211 million. It is estimated these landings generated a billion dollars of economic activity. The industry also generates thousands of jobs, with 2,500 commercial fishermen, and 1,500 employed by more than 100 seafood processors/dealers. Home to six major fishing ports, Cape May/Wildwood was the fifth highest commercial fishing port in the nation in terms of value of the catch at $103 million.