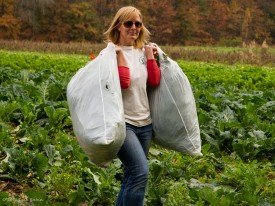 Last time we saw Kristina Mayberry Guttadora (Plant Biology, ’99) she was lugging huge bags of collard greens that had been gleaned from farmer Jim Giamarese’s field and was loading them on a truck for area food banks.

Farmers Against Hunger was founded in 1996 as a nonprofit organization of the New Jersey Agricultural Society. According to its history and mission statement, it was “inspired by farmers who wanted their extra produce to go to good use… and is dedicated to collecting surplus fruits and vegetables from New Jersey farmers and distributing them to those in need through local community organizations.”

Over the years, the program has expanded to include produce, breads and other products from grocery stores and wholesale and retail outlets More than 50 farms, food stores, businesses and foundations – along with 1,200 community volunteers – support the program. To assemble workers, Guttadora relies on Facebook (NJ Farmers Against Hunger) and her email listserv to inform volunteers.

According to Kristina, the vast majority of recipients are working poor who have been affected by tough economic conditions, as well as the elderly and disabled. “The impact and value of having access to fresh vegetables and fruit is enormous to these families. Recipients delight in the sweet taste of corn and the crunch of a fresh apple,” she says.

Kristina came to Rutgers in 1995 from rural Pennsylvania. She chose the School of Environmental and Biological Sciences (Cook College, at the time) “because it was a small community within the larger university. I was looking for a university that had access to a city, study abroad, and a wide variety of cultural experiences. The Rutgers campus offered the ‘city’ atmosphere I was looking for, while Cook offered the more peaceful college campus.”

While still in high school, Kristina had her sights set on international studies, and had been accepted at universities in Boston and Washington, DC. Then she took an agricultural education class in her senior year and was hooked. Her high school ag teacher had earned her master’s degree at Rutgers and suggested it as an option. “I remember coming up Route 18 for the first time and seeing New Brunswick and thinking this was a ‘Big City’. That was exciting to me as a small town Pennsylvania girl. My New Jersey roommates taught me the street smarts I needed, and soon I grew to be a proud New Jersey resident.

“I feel grateful to look back and know that my four years were spent leading me to where I am today,” she recalls. “It was an amazing experience to be at a land grant school where everyone in some way was connected to agriculture and environmental science. While students at other colleges were spending spring break in Cancun, we spent it visiting mango plantations and sugar cane factories in Puerto Rico, learning about tropical agriculture.

“Our classes in weed science got chuckles from the non-agricultural community. Our group of friends worked on the student farm and learned how to butcher meats. We went to lectures on the infestation of the wooly adelgid’s effects on hemlock forests and the impact of purple loosestrife on wetland communities. It was a great time to be surrounded by a community of people who could connect with you on these topics.”

Kristina has stayed close to the land since her graduation as a Plant Biology major, with a certificate in agricultural education. After one year as an intern at the University of Delaware’s botanical gardens, she was hired by the Freehold Regional High School District, where she took over the agricultural program for the district.

In her position at Farmers Against Hunger, Kristina spends much of her in-season time scheduling collections, planning fundraisers and working with recipient groups. Her non-harvest time is spent writing grants, designing brochures, and reaching out to partners and the public. She finds this to be a good balance and enjoys the time spent interacting with such a wide variety of people.

When not on the road in her car or one of the delivery trucks, Kristina enjoys her Freehold home with son Graham and her husband Greg Guttadora, who incidentally also is an alum (CC ’99). In fact, the two met during their college years – on one of the memorable trips to Newfoundland organized by our own Professor Roger Locandro, now retired.