A panel of Rutgers and industry experts discuss how to prepare residents for climate change impacts. Tony MacDonald of the Monmouth University Urban Coast Institute is the moderator.

On May 22, a diverse group of public and private New Jersey leaders gathered at Rutgers University to engage in a dialogue about enhancing capacity in the Garden State to better plan for and adapt to a changing climate. Organized by the New Jersey Climate Adaptation Alliance, the conference was designed to highlight leading climate preparedness and adaptation practices across the country, efforts underway in New Jersey, and new policies that are needed to strengthen preparedness capacity in many sectors of the state including agriculture, public health, transportation, energy, natural and water resources protection, and urban communities. Conference agenda and presentations by speakers are available. 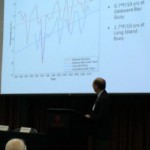 The New Jersey Climate Adaptation Alliance is a network of practitioners and policymakers representing NGOs, the private sector, academics and government with the mission of enhancing climate change preparedness and resilience in New Jersey. The Alliance is facilitated by Rutgers University.

“What makes this Alliance unique is that it is a network of networks, developed from the ground up, bringing together a broad coalition to focus on what we need to do together to adapt to a changing climate,” noted Marjorie Kaplan, Ph.D., co-facilitator of the Alliance and Associate Director of the Climate and Environmental Change Initiative. “Bringing the resources of a major research university with our phenomenal depth of talent in the natural and social sciences, provides the Alliance with a wealth of resources to complement its efforts.” 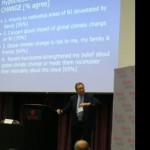 With a mix of national and New Jersey speakers, the conference provided an in-depth examination into the state of climate change adaptation in New Jersey in context of activities underway across the country. “This conference was designed to build upon the inaugural workshop held at Rutgers in November 2011 where climate vulnerabilities for New Jersey were highlighted and participants recommended the university play a role in helping with its development,” stated Jeanne Herb, co-facilitator of the Alliance and Associate Director, Environmental Analysis and Communications (EAC)

Morning presentations were kicked off by Rutgers professor of atmospheric science and director of the Rutgers Climate and Environmental Change Initiative, Anthony Broccoli who highlighted the projections and trends that are being felt and expected over the coming decades in New Jersey. Professor Broccoli was followed by Michael Greenberg, professor and associate dean of the Edward J. Bloustein School of Planning and Public Policy who unveiled results of a recent statewide survey gauging public concern about the impacts of global climate change and support in New Jersey for aggressive state land use and fiscal policies to reduce risks in flood-prone areas. 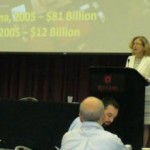 Nationally recognized panelists included experts in agriculture, coastal issues, natural resources, public health, transportation water resources and utilities. Vicki Arroyo, executive director of the Georgetown Climate Center at the Georgetown Law School, was one of two keynote speakers and she spoke to the national challenges in adapting to a changing climate and provided context for state level approaches. The other keynote was Beverly Wright, Ph.D., environmental justice advocate, author, civic leader, professor of Sociology and executive director of the Deep South Center for Environmental Justice at Dillard

University. She pointed to the need to address risks to vulnerable populations, drawing upon experiences of displaced African-American and minority residents of New Orleans following Hurricane Katrina.

Leading New Jersey practitioners spoke on panels about ways to prepare New Jersey residents, infrastructure and communities. The panels not only provided attendees with information about practices that are underway and ideas they could consider in their own work, but also ways in which coordination amongst various sectors can be achieved to provide for better preparedness and response outcomes.

Many of the panelists were able to draw upon recent extreme weather events, such as Hurricane Sandy and Tropical Storm Irene, to provide insights as to the challenges we will expect from a changing climate, including what practices worked, while identifying gaps that can be used to set some policy priorities going forward.