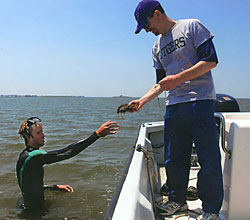 Designated by the federal Environmental Protection Agency as a National Estuary Program site in 1995–one of 28 such estuaries of significance in the U.S.–Barnegat Bay hosts a variety of environmentally sensitive habitats such as sand beaches, bay islands, seagrass meadows, finfish nursery areas, shellfish beds, and waterfowl nesting grounds.

Over the years, Rutgers marine sciences professor Michael Kennish has witnessed the decline of Barnegat Bay both in regard to its habitats and biotic communities. Over-enrichment of nitrogen in the estuary has led to excessive plant growth and eutrophication—depletion of oxygen in the water, leading to calls for more stringent standards to set nutrient limits for the bay.

Kennish explains that unlike open estuarine systems like the Delaware, where nutrients and chemical contaminants flush out to sea, the Barnegat is nearly totally enclosed by barrier islands that host our popular beach towns in Ocean County. As a result, bay water does not flush very well to the open ocean but can remain in the bay for months before exiting. It then has lots of time to accumulate in bottom sediments and organisms inhabiting the estuary. This, along with the growing development to keep pace with an escalating coastal population, has contributed to the bay’s decline. 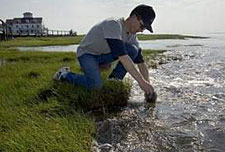 Decline of Marine and Aquatic Life

The bay’s impairment is due to multiple causes, one of which is the overload of nitrogen. One potential source of nitrogen is lawn fertilizer that enters the bay from runoff and stormwater. Development has significantly altered the natural land cover in Ocean County, facilitating runoff of nitrogen into tributaries that drain into Barnegat Bay. Compacted soils, impervious cover, and inadequate stormwater systems have also exacerbated the nitrogen enrichment problem.

The once thriving Barnegat Bay shellfisheries are basically gone. The hard clams that were prolific in the 1960s and 1970s are in major decline. In 1975, Barnegat Bay supplied 1.4 million pounds of clam meats, which by 2005 had dropped to nearly zero. The formerly abundant bay scallops also are scarce or nonexistent. The seagrass on the bottom of the bay, which supports numerous organisms, has diminished dramatically during the past decade due to algal blooms and other factors.

To bring back a system like Barnegat Bay suffering from the heavy impact of nutrient enrichment and eutrophication, it is necessary to reduce the nitrogen load to the water body.

A major step towards that goal was the enactment in January 2011 of a sweeping fertilizer law meant to protect New Jersey waters while allowing for appropriately fertilized and healthy lawns.

Rutgers scientists, including Kennish, played a key role, providing much of the scientific data used in the process of developing the legislation. The potential of the new fertilizer law to lead to healthier waterways and aquatic communities will be a boon to fisheries in New Jersey, as excessive nitrogen, considered an important contributor to water pollution, leads to algae blooms that deprive water of oxygen and kill fish and other marine life.