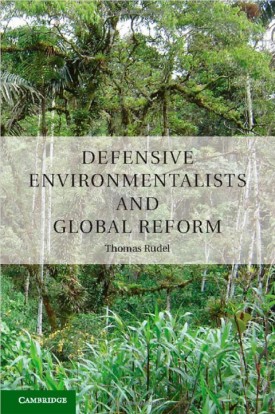 Tom Rudel, Distinguished Professor in the Department of Human Ecology, has a new book, Defensive Environmentalists and the Dynamics of Global Reform, published by Cambridge University Press.

According to Rudel, “This book first began to take shape forty years ago when I was a young graduate student taking courses and attending talks on subjects, such as ecology, about which I knew next to nothing.” His interest was sparked after reading an article in Science by Eugene Odum (1969) that was ostensibly about changes in plant communities, but he regarded it to be a good explanation for historical patterns in some human communities.

“As I learned more about the paths to survival in an academic world, it became clear to me the wild analogies about the similarities between natural communities and human communities did not have a place in any discipline, even one with as expansive a view of its mission as sociology, ” said Rudel.

He filed away his ideas and now, some 40 years later, Rudel’s latest work, which he describes as a “theoretical piece, more a book-length essay,” is available to the public.