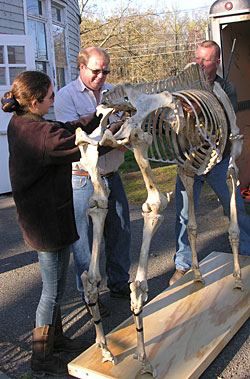 In 2012, the Department of Animal Sciences at the School of Environmental and Biological Sciences celebrated the addition of its most unique member of the equine research herd, an authentic articulated horse skeleton!

Carey Williams and Sarah Ralston, professors in the Department of Animal Sciences, were instrumental in acquiring the equine skeleton, which was purchased through a joint grant with Gloucester Community College (GCC). The skeleton has served as a teaching tool through the “Supporting Equine Education Development” initiative, a bridge program that provides GCC students access to Rutgers facilities and faculty as they pursue an associate’s degree in equine science.

Since its debut at Rutgers, the skeleton has received much public interaction. During its first Ag Field Day at Rutgers Day, the Equine Science Center held a naming contest for visitors to compete for the honor of suggesting a new moniker for the skeleton. After a highly-competitive voting process, the equine skeleton was dubbed: “RU Wish Bone.”

“The full skeleton has added a completely new dimension to our students’ learning experience in understanding basic anatomy,” explained Ralston. “We originally used many individual skeletal parts, such as skulls, leg mounts, and hooves, which we incorporated into our teaching program. Although those models alone are wonderful teaching aids, seeing the big picture really puts everything in perspective.” 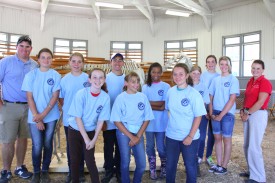 Dr. Carey Williams and youth from the Harness Horse Youth Foundation pose with RU Wishbone during an open house hosted by the Rutgers Equine Science Center.

RU Wish Bone is comprised of over two hundred individual bones that once belonged to a 33-year old horse that died in the care of an equine rescue. The skeleton is missing a portion of its teeth, which provides a vivid visual depiction of potential equine health problems. For students, RU Wish Bone’s unique dentistry illustrates how a lack of responsible horse ownership affects an animal at the skeletal level, impossible to demonstrate on standard equine skeleton prototypes. 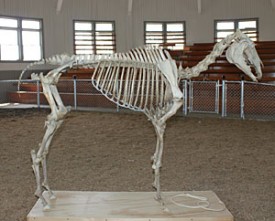 The assembled skeleton on display at the Round House, its permanent home on the George H. Cook Campus.

“Having the model is definitely a distinct advantage for students to understand the functioning anatomy of the horse, particularly the intricate parts such as the joints,” Williams agreed. “It’s also a great way to get students out of the classroom for hands-on learning.”

The model was constructed and personally delivered by Walter Varcoe, retired equine manager for the New York State Department of Corrections who specializes in the unique art of assembling free-standing skeletal models for institutions around the world. His models have been featured at the Museum of Natural History in New York City, as well as numerous veterinary clinics, conferences, and universities. In addition to the University of Delaware, Rutgers is now the only other academic institution in the Northeast to purchase an articulated equine skeleton as a permanent addition to the equine educational resources.

RU Wish Bone is often on display for the public during the annual Ag Field Day at Rutgers Day in April and also at the Rutgers Equine Science Center’s open house events, which are held every year in July. For more information about the equine skeleton model, or to attend an Equine Science Center open house, visit esc.rutgers.edu or call 848-932-9419.