If there was a community service award for the creatures in our bays and estuaries, there would be no more deserving recipient than the oyster. They may be small but these bottom-dwelling feeders can filter up to 50 gallons of water a day. As they pump water through their gills, oysters feed on plankton but also filter out particles, suspended sediments, and contaminants, keeping the water clean for bay grasses and other underwater life. Oysters also make good neighbors by opening up their reefs and providing habitat for several species of fish and breeding grounds for others. Not only are these reefs a safe haven for young oysters to grow, but other young invertebrates such as barnacles and sponges thrive in this environment. These reefs also help prevent shore erosion and, as if they haven’t contributed enough, oyster shells contain calcium carbonate, a known buffer that can help offset ocean acidification. And that’s just what they do for the underwater community. 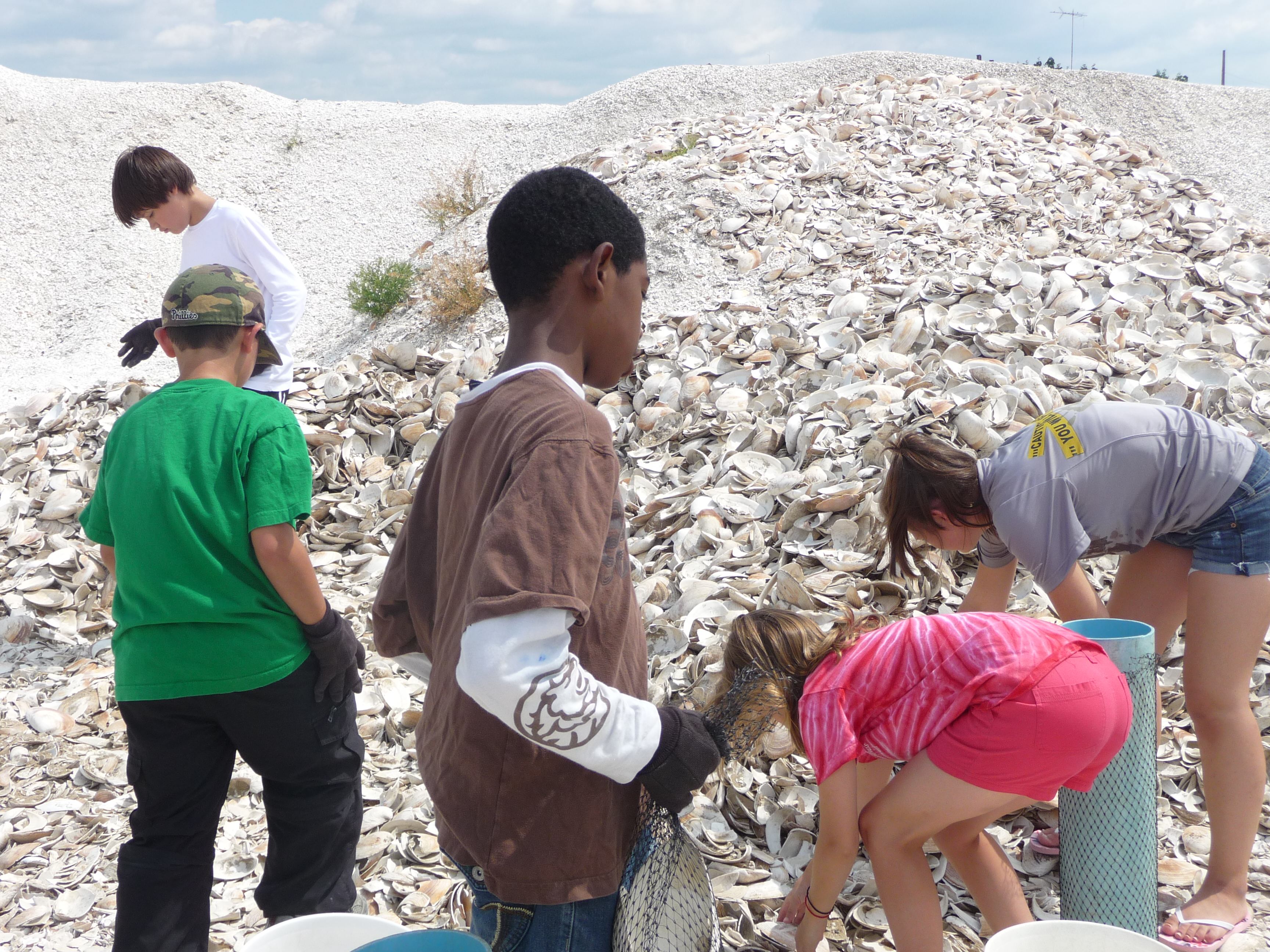 Students from Friends School in Mullica Hill visit Shellpile, NJ on the banks of the Maurice River to fill shell bags. Their field trip to the Bayshore gave the students an opportunity to see the heart of the Delaware Bay oyster fleet in Bivalve, NJ and to explore the marsh habitats of the Maurice River.

Landlubbers hold the oyster in high esteem and consider it a delicacy. Oysters are rich in nutrients and are a good source of magnesium and phosphorus, and a very good source of protein, vitamin D, vitamin B12, iron, zinc, copper, manganese, and selenium. For regions fortunate enough to have water bodies that are oyster habitats, a healthy oyster industry is a boon to the local economy, providing jobs for boat and dock workers, shuckers, packers, and truck drivers.

New Jersey once had a thriving oyster industry. Due to oyster disease, historical overfishing, pollution, and sedimentation from inland runoff, the New Jersey oyster population has declined dramatically to the point where most bays no longer maintain a commercial oyster fishery. New Jersey’s major remaining oyster fishery is in the Delaware Bay. Once an oyster reef is in decline, it becomes a vicious cycle where the environment becomes degraded from lack of the oyster’s beneficial impacts and the degraded environment consequently becomes less habitable for oysters.

For the past several years, the New Jersey Department of Environmental Protection has worked with Rutgers NJAES and the New Jersey Shellfish Council, an industry group, to step up efforts to provide habitat and restore oyster populations. One of the effective management tools for re-establishing oyster populations is to build or expand oyster reefs, using “shell plantings”. Though oysters begin their lives as free-swimming larvae they need shell or another hard substrate to attach to in order to continue to develop and grow; oyster reefs consist of layers of oyster shells built up on the bay bottom. Shell plantings involve dropping thousands of bushels of shells by barge into specific areas of the bay to provide surfaces for young oysters, spat to settle and grow. To help ensure their survival, once the spat reach a certain level of growth on the shells, they are moved from saltier water down-bay “planting” sites to fresher water up-bay, which offers more protection, especially from the parasitic disease Dermo.

Community-based oyster restoration efforts require lots of shells and lots of people to prepare the shells for planting. Lisa Calvo, aquaculture agent jointly affiliated with NJAES and New Jersey Sea Grant Consortium, directs a project that not only takes care of the shell handling, but at the same time, educates kids, provides hands-on learning opportunities, demonstrates environmental stewardship, and engages the community. Project PORTS (Promoting Oyster Restoration Through Schools) is a multi-faceted program that Calvo has been conducting in schools, mostly in bayshore communities, since 2007. Working with five to 10 schools each year, Calvo collaborates with teachers and administrators to create a specialized program for each school. In-class lessons involve the actual investigation of oyster biology using specimens, as well as learning about oyster fisheries and the ecology of the Delaware Estuary.

For most of the students, the most exciting part of participating in Project PORTS is working on the restoration project, which directly applies their lessons to a real-world problem. Student participation in the restoration project involves recycling surf clam shells to create oyster reef habitat. Each partner school receives a truckload of surf clam shells, which are waste shells from New Jersey clam processors. Participating students diligently fill stretchy mesh bags with the shell and load them onto a vehicle for transport to the bay for the next phase.

During the summer, volunteers of all ages from surrounding communities and even from neighboring states, place the shell bags in the lower Delaware Bay to provide a settlement surface for free-swimming oyster larvae which circulate for a few weeks before attaching to the shell surface.

The last phase of the PORTS restoration involves moving the young oysters and their foundational shell habitat up-bay where they are planted on fishery and conservation sites.

The benefits of the community-based oyster restoration component of Project PORTS are many, including giving students ownership of their studies, and promoting an appreciation for the Delaware Estuary ecosystem and its valuable oyster resource. In addition, it fosters the ideals of environmental stewardship among school children and the volunteer community, which assists with the field portion of the project during the summer months.