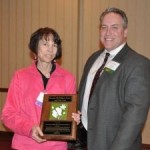 Julie Fagan, associate professor in the Department of Animal Sciences, turned a project she began with students in a summer “Ethics in Science” course in 2011 into an award-winning entry on behalf of a community conservation group she leads. 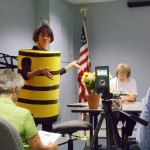 Julie Fagan, in bee costume made by her students, presents the conservation project to Haycock Township supervisors.

According to Fagan, “the project began with the students reaching out to community residents, going door to door, to help them make their backyard more wildlife-friendly, and doing oral presentations to convince the township supervisors to move forward with the project.”

Members of the awards jury described the award-winning entry. “We were impressed with this project’s focus on protecting wildlife, including bees and bats, for which there is far too little public awareness and funding. The inclusion of site work to control invasive plants adds real habitat modifications to foster their goals.”

“The project is also especially worthy due to the high caliber of scientific support and the extensive use of social media for public education.”