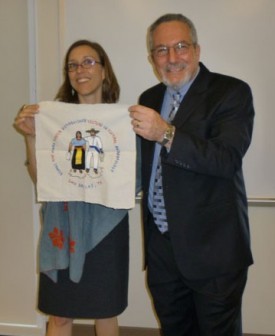 Peter Guarnaccia, professor in the Dept of Human Ecology and investigator at the Institute for Health, Health Care Policy and Aging Research, was invited by former Rutgers anthropology graduate student Nia Parson to deliver the George and Mary Foster Distinguished Lecture in Cultural Anthropology at Southern Methodist University (SMU). Parson, who completed her Ph.D. in Anthropology on domestic and political violence in Chile, and is now an assistant professor at SMU, hosted Guarnaccia’s visit and interaction with the Department of Anthropology.

Parson presented Guarnaccia with a piece of embroidery depicting George and Mary Foster, for whom the lecture is named. The work was done by a textile artist from the village in Mexico where George M. Foster, a former anthropologist at the University of California, Berkeley, and one of the founders of medical anthropology, carried out much of his research.

Guarnaccia spoke on “The Anatomy of a Cultural Syndrome: Cultural and Psychiatric Perspectives on Ataques de Nervios.” He also lectured in a course on “Health and Human Rights” and consulted with anthropology graduate students about their research.

He then went on to Texas Christian University (TCU), where he was hosted by associate professor, Lisa Vanderlinden, also a former Rutgers anthropology graduate student, who studied infertility among Turkish women in Germany. 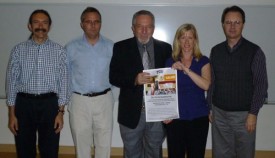 Peter Guarnaccia with Lisa Vanderlinden, associate professor of anthropology at TCU and her anthropology colleagues. They are holding the poster announcing Guarnaccia’s lecture.

He gave a large, public lecture on “Nervios and Ataques de Nervios: Problems and Promise of Creating Culturally Specific Diagnostic Systems” and interacted with students and faculty in the anthropology department at TCU.

“It was very exciting to see former graduate students now as active faculty members of anthropology and to interact with them as colleagues,” Guarnaccia observed.