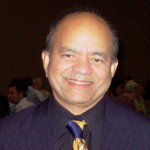 “Transgenerational Epigenetic Effects of Fetal Alcohol on the Hypothalamic Proopiomelanocortin Gene,” published by the lab of Dipak Sarkar, professor of Animal Sciences, was ranked among the top 15 articles in the field of biological psychiatry in 2012.

The paper was nominated but did not win the Society of Biological Psychiatry Ziskind-Somerfeld Research Award, an annual award of $5,000 to recognize outstanding and original investigations drawn from the archival reports in the journal Biological Psychiatry. According to the Society, “special consideration is given to the originality of the approach and independence of thought in the archival report.”

Authors of the paper include Dmitry Govorko, Rola A. Bekdash, Changqing Zhang and Dipak Sarkar, who also directs the Endocrine Research Program at Rutgers. The Society of Biological Psychiatry was founded in 1945 to encourage the study of the biological causes of and treatments for psychiatric disorders. The award will be presented by the President of the Society during its 68th Annual Meeting on May 16-18 in San Francisco, CA.