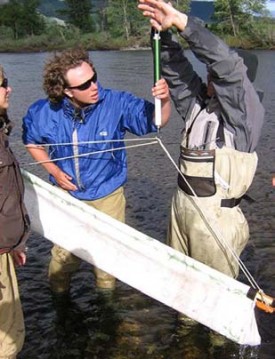 Fisheries managers should sharpen their ability to spot environmental conditions that hamper or help fish stocks, rather than assuming that having a certain abundance of fish assures how much can be sustainably harvested.

That’s because the potential harvest of fish is only closely linked to abundance in 18 percent of 230 fish stocks assessed, according to Ray Hilborn, University of Washington professor of aquatic and fishery sciences, who led the joint study with Rutgers University. Olaf Jensen, specialist in fisheries science and aquatic ecology at Rutgers, co-authored the study.

Findings of the study were published on Jan. 14 in the online early edition of the Proceedings of the National Academy of Sciences.

For the other 82 percent of stocks, potential harvest of fish was primarily controlled by irregular shifts in environmental conditions or was random and not controlled by either abundance or shifts in environmental regimes. Yet targets based on abundance of fish stocks are the mainstay of most management plans in the U.S. and a growing number of other countries: If a stock reaches certain abundance, it is thought, then potential harvest is maximized.

“There have been competing ideas about productivity,” Hilborn said. “One is that it depends primarily on abundance. The other is that productivity of a stock mostly depends on whether there’s a period of good conditions or a period of bad conditions.”

“What we’ve done in this study is take 230 fish stocks and ask which of these explanations explains the data for each fish stock better,” he said.

“Regime shifts can affect the number of young fish that reach adulthood, their ability to grow or how long they live. A shift can be caused by such things as changing ocean temperatures or increases in predators,” said lead author Katyana Vert-pre a UW master’s student in aquatic and fishery sciences.

The authors write, “Although there may be little that fishery managers can do to avert shifts to a lower productivity state, improved methods for early detection of such shifts may permit managers to reduce harvest in time to avoid collapse.”

Study co-author Olaf Jensen of Rutgers University says, “We can think of fisheries like natural savings accounts, where we’re trying to harvest the interest – what fisheries scientists call the ‘surplus production’ – without causing a long-term decline in the principal or abundance of mature adult fish.  Fisheries scientists have generally operated under the assumption that the ‘interest’ is determined by the abundance of mature adults.”

“Our research shows that this is rarely the case. Instead of operating like a simple savings accounts, fisheries are more like volatile stocks where the rate of return is determined by a variety of complex factors outside the control of managers,” Jensen said.

The findings don’t mean we shouldn’t attempt to manage fisheries or try to maintain fish stocks at high abundance, Hilborn said, because having plenty of fish benefits natural food chains and ecosystems and lowers the costs of harvesting fish.

This deserves particular attention, he said, as plans and timetables are formulated to rebuild an ever-increasing number of fish stocks. In many cases natural causes are the reason stocks are at low abundance, rather than overfishing, although fishing will cause even lower abundance in such cases, he said. Also, rebuilding fish stock abundance often won’t result in promised increases in sustainable yield, he said.

The fish stocks analyzed are part of a database initially created in 2006-7 in an effort led by Hilborn and Dalhousie University’s Boris Worm.

The fourth co-author is Ricardo Amoroso with the Centro Nacional Patagónico in Argentina. Funding came from the National Science Foundation and the National Oceanic and Atmospheric Administration.