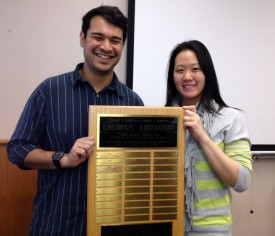 This award was established in 2003 and is supported by the Robison family. In 2012, additional support for a second scholarship came from the Linda and Dennis Fenton Fund. The Robison scholarship is awarded to a graduate student who has demonstrated “tremendous competence and accomplishment in their academic and research program while at Rutgers University, has shown an active participation in or a leadership role in the activities of the department, college, university or community, and is motivated to help and improve the human condition at this time and upon graduation.”

This award is named in honor of Robert Robison, who earned his bachelor’s and master’s degrees at Cornell University and a doctorate in Microbiology at Rutgers University in 1954. His research at Rutgers was in soil microbiology and streptomycin synthesis in actinomycetes under the supervision of Selman Waksman, Robert Starkey and Walter Nickerson. The scholarship was established two years before Robison passed away on Oct. 15, 2005.