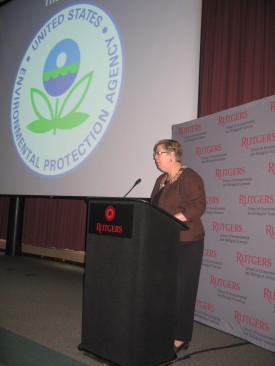 The U.S. Environmental Protection Agency (EPA) has come a long way, said Judith Enck, Region 2 administrator, but there is much more work to be done.

Enck spoke on Jan. 29 to students, faculty, and staff on the George H. Cook Campus as part of a two-week program highlighting the work of the EPA, including a photo exhibit called “Documerica,” depicting historic and current environmental sites across the U.S. The exhibit, which was featured in the lobby of the Cook Campus Center from Jan. 22 to Feb. 5, is traveling the country and being updated regularly.

In her talk, Enck cited several improvements in the quality of life that have come about as a result of the EPA, since its operations began in 1970, such as the immense improvement in water resources (remember flames shooting from the polluted Cuyahoga River in 1969?), significant reduction in lead exposure, and others. 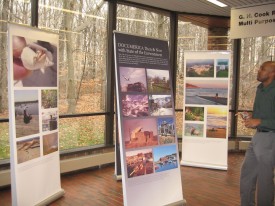 EPA’s “Documerica” photo exhibit captures the state of the environment in the 1970’s, as federal efforts for environmental protection got underway.

According to Enck, areas that still needs attention include:

Chemical policy reform: “There are 80,000 chemicals used in commerce today,” Enck said. “The EPA is required to test only 200, and only five have been judged to be banned.”

Urban waterway renewal: Before the EPA, 78 percent of Americans had access to clean drinking water; now 92 percent do. The goal is 100 percent, and especially urban waterways need attention, she pointed out.

Environmental threats: “I have never in my lifetime seen anything like Hurricane Sandy, which reminds us of the work we still need to do,” she said. These included actions taken in the aftermath of the storm, like securing Superfund sites, managing failed sewage treatment plants, testing drinking water plants and facilities, collecting household hazardous waste, to name a few.

Climate change: “Sandy has refocused EPA’s attention on climate change,” said Enck. The focus should include starting with solutions, such as reductions in fossil fuel usage, examination of green energy and renewable energy sources, energy efficiency, and recycling (“you may think of recycling as being so ’80s, but it significantly lessens material that needs to be mined, processed, and transported; it is one of the most important tools we have in addressing climate change, and it even saves taxpayer dollars,” she commented).

Enck encouraged students to consider careers in the environment and even to check out the EPA website for job openings. She also asked her audience to encourage community efforts and the support of the public.

“We have made a lot of progress, but we have a long, long way to go,” she concluded.