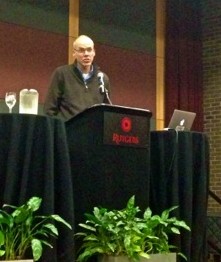 Bill McKibben, acclaimed writer and prominent environmental activist, received a standing ovation for his standing-room only public address held at the Rutgers Student Center on Feb. 4.

His talk, Do the Math: Why Climate Change Matters and What You Can Do About It, simulcast and live-streamed by RU-TV, drew connections between climate change, extreme weather and the fossil fuel industry. McKibben spoke of Rutgers as the “thinking center of the state” and urged the university to take moral and political leadership in challenging the fossil fuel industry and tackling the global climate emergency.

Before the talk, McKibben’s daylong engagement with the campus included a faculty lunch, a writers’ workshop and a dinner meeting with student environmental leaders.

Both events were organized by the Rutgers Initiative on Climate and Society, a joint project of the School of Environmental and Biological Sciences and the School of Arts and Sciences, and co-sponsored by a diverse array of Rutgers institutions, including the Campus Deans and several student councils, among others.