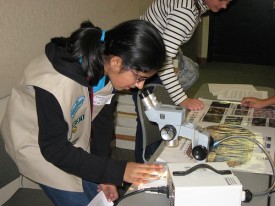 It’s “all hands on deck” for Girl Scout Cadettes from Central and South Jersey; that is, hands on ocean sediments, microscopes and “Oobleck,” in the inaugural Ship to Shore series, hosted by Rutgers Institute of Marine and Coastal Sciences (IMCS). The Ship to Shore program targets girls in 6–8 grades to introduce them to ocean science, and otherwise encourage and prepare girls for careers in science, technology, engineering and mathematics. It’s funded by a grant from the National Science Foundation (NSF) and the Consortium for Ocean Leadership, which runs the Integrated Ocean Drilling Program (IODP). Through the IODP, the NSF provides a light drillship research vessel, the JOIDES Resolution, which drills core samples to collect measurements from under the ocean floor, giving scientists a glimpse into Earth’s development.

This pilot program involved four sessions of activities for the girls to take part in and earn a Girl Scout Ship to Shore patch, which they display on the back of their uniform sashes or vests to show activity participation. The first activity involved regional workshops where Girl Scout adult volunteers, trained by IMCS staff, conducted a fossil hunt by light of a Coleman lantern to simulate a paleontological dig. The girls performed a coring experiment in a second regional workshop and learned about the JOIDES Resolution drilling research vessel.

The Ship to Shore series was capped by trips to Rutgers IMCS on the New Brunswick campus for the final two events. A daylong event, staffed by women scientist volunteers of IMCS faculty, staff and graduate and undergraduate students, immersed the girls further into the world of marine science and ocean ecology. At the “Intro to Sediments” station, the girls examined sediment core tops from different locations on Earth using microscopes and discussed what they were made of and why they differ. The “Climate Change Science” station introduced the girls to ocean acidification as they learned how increased CO2 in the atmosphere and the resulting decrease in pH affects calcifying marine organisms. 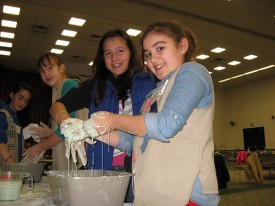 Exploring the properties of “Ooblek”.

At the “Deep Sea Microbiology” station, the girls learned about deep sea microbes and how they are studied, including using molecular techniques like DNA extraction. And finally, the Oobleck! This gooey substance of Dr. Seuss fame was featured at a station focusing on the nature of science and science practices, such as exploration and creativity.

The day’s event culminated with a live “ship to shore” video call with scientists on board the JOIDES Resolution. The Cadettes were joined remotely on the call by Girl Scouts of Greater New York and Girl Scouts of the Commonwealth of Virginia at the Virginia Museum of Natural History. The JOIDES was in the Pacific off the coast of Costa Rica and the Girl Scouts were given a virtual tour of the ship and asked questions of the scientists on board.

For the final session of the program, the Cadettes were again invited to campus to view the IMAX film Volcanoes of the Deep and to receive their Ship to Shore Science patch – designed with the image of the JOIDES Resolution. Fifty girls received this custom patch for participation in this unique endeavor; perhaps the next generation of women scientists?

Carrie Ferraro, program coordinator at IMCS, said “Middle school is a critical time for students to determine whether they are interested in science. Moreover, women are still underrepresented in many science fields. This program not only exposes the girls to the science of ocean drilling but it also allows them to explore different ocean science related careers. Hopefully, this will encourage these young women to become scientists.”

Adds Jennifer Wolder, Series and Events Specialist of Girl Scouts of Central & Southern New Jersey council, “There is a common misconception that Girl Scouting is merely cookies, crafts & camping. We’re far more than that; we move at “the speed of girls,” open their eyes to the world around them, and guide them to become active leaders. Programs like these, in collaboration with the State University and beyond, help expose our girls to careers and sciences they may not hear about in school. We aim to spark their interest, curiosity, and hope they will continue to discover new fields and experiences throughout their lives.” 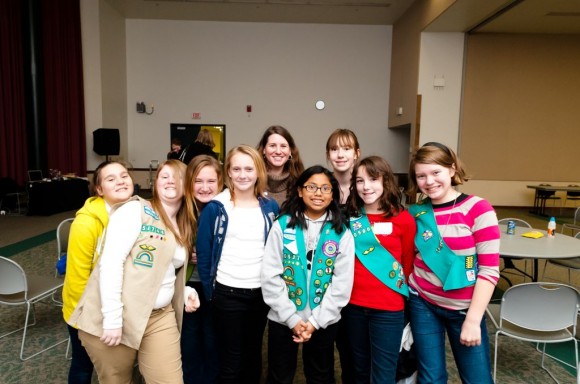